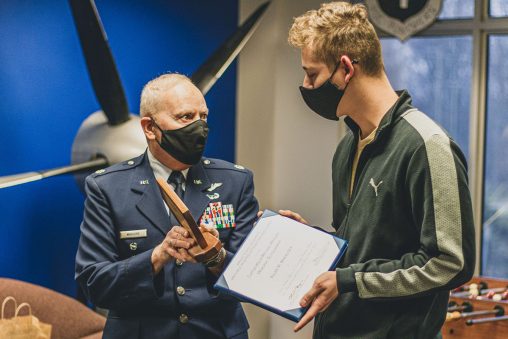 A room at Wright State University that honors alumnus U.S. Air Force Capt. Kevin M. Maguire, who tragically died in a training accident in 1992, has been rededicated.

“Being able to honor the nobility of Captain McGuire’s sacrifice is a true privilege,” said Dylan Shope, the Air Force ROTC Cadet Wing commander, who presided over the ceremony. “Uniquely, Captain McGuire was in my exact position as Cadet Wing commander 35 years ago, and I am beyond fortunate enough to be able to carry the torch of selflessness and courage that he exemplified. His legacy lives on with the spirit of our Cadet Wing.”

Maguire was killed on Nov. 30, 1992, over Montana in a training accident when the C-141 Starlifter transport plane he was aboard collided in mid-air with another C-141 following completion of an aerial refueling.

“We as Kevin’s family and friends are extremely grateful to the cadets and cadre who have honored my brother’s memory,” said Frank Maguire, a retired Air Force lieutenant colonel. “The detachment was a focus of Kevin’s time at Wright State, and there is no more fitting place to have dedicated to him in honor of his service, courage and sacrifice.”

The rededication was designed to reinforce Kevin Maguire’s legacy within Wright State and the Air Force ROTC program.

Following the ceremony, Frank Maguire presented a $5,000 scholarship to Allan Wheelock, an Air Force ROTC cadet who is majoring in information technology and cybersecurity, in honor of Maguire’s late brother. Wheelock said he was both shocked and honored to receive the award.

“This scholarship will definitely help me in pursuit of my college education and dreams of service in the future with the U.S. Air Force,” he said.

Following Kevin Maguire’s death, the Maguire family established a memorial scholarship at Wright State in his name. The scholarship fund helps students enrolled in the Air Force ROTC program with financial assistance to complete their college education and go on to serve in the Air Force.

Plaque honoring the Air Force ROTC cadets who have received a scholarship in honor of Kevin Maguire.

More than 25 students have received scholarships, totaling over $100,000. Recipients have gone on to serve in the Air Force as fighter pilots, intelligence officers, special agents in the Air Force Office of Special Investigations, in Space Operations and other units.

Dawn McClary, an analyst in Wright State’s Office of Financial Aid and a friend of Kevin Maguire, said his death was a tragedy but his family found a way to honor him and benefit Air Force ROTC students.

“I think that this sets an example for everyone who deals with adversity,” she said. “I am glad Air Force ROTC is honoring Kevin’s memory in a way that lifts up his example to current and future students.”