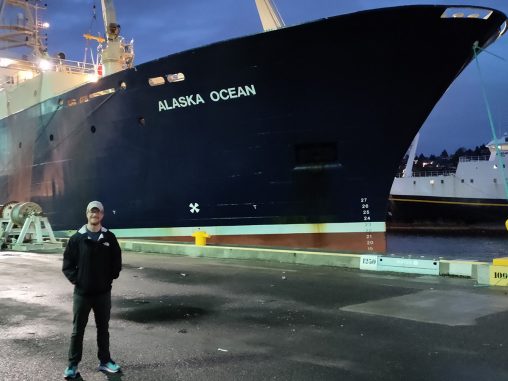 For a Midwesterner, Ben Strang spends a lot of time on the water. The 2021 Wright State University–Lake Campus graduate is an observer on fishing vessels that ply the Gulf of Alaska, the Bering Sea and northern Pacific.

Strang, who received a degree in integrated science studies from Lake Campus, works for the National Oceanic and Atmospheric Administration (NOAA), helping ensure that fishing quotas are adhered to.

NOAA is the scientific and regulatory agency within the U.S. Department of Commerce that forecasts weather, monitors oceanic and atmospheric conditions, charts the seas, conducts deep sea exploration, and manages fishing and protection of marine mammals and endangered species in the U.S. economic zone.

Strang’s primary duty involves rigorous biological sampling of catch to ensure that fishing quotas are stuck to and the catch of non-desirable species is minimized. Each boat is allotted a certain amount of quota-by-species that they are allowed to catch.

“This ensures a sustainable fishery for the future,” said Strang. “The data I collect is used for real-time management while the boats are actively fishing and to inform future management decisions regarding the fishery.”

Strang said the most challenging part of his work is the scheduling and being far from home. He works 12-hour shifts seven days a week while on the boats.

“These boats don’t take weekends or holidays off so it can be nonstop,” he said. “My most recent boat has an entire weight room so I’ve been hitting the weights during my down-time.”

“They probably got within 20 feet of the boat at one point,” he said. “It was really cool to watch. There were a few females, a juvenile and a giant male.”

The experience has also enabled Strang to meet people from all over the world.

“I’ve worked with people from Samoa, Cambodia, Laos, Norway, Poland, Mexico and Argentina to name a few,” he said. “It’s awesome to sit down with these people and hear their stories about their home life, how they grew up and what their homeland is like.”

Strang grew up in Kettering, moved to New Bremen when he was in seventh grade and graduated from New Bremen High School in 2014. His father is an information technology specialist at Wright State’s Lake Campus and his mother is the pastor at St. Paul’s United Church of Christ in New Bremen. 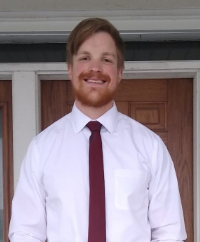 Ben Strang has worked on fishing vessels in the Gulf of Alaska and the Bering Sea and off the coasts of Washington and Oregon.

Strang enrolled at Wright State’s Lake Campus to pursue a nursing degree. However, he soon switched majors to integrated sciences so he could work toward a career in fisheries management.

Strang said the teaching at Lake Campus was far better than anything he had experienced anywhere else.

“I spent a semester attending Ohio University in Athens, and I figured out quickly that Wright State’s Lake Campus had a learning environment that was a lot more personal — smaller classes, more attentive faculty — where I could get to know my professors and feel comfortable asking questions, going to office hours,” he said

Strang said a highlight of his time at Wright State was working in the water quality lab of Stephen Jacquemin, Ph.D., professor of biological sciences.

“The work going on in his lab is important to the local ecosystem and economy, and the experience I gained from working in that lab set me up for employment immediately following graduation,” Strang said.

“I feel very fortunate to have been able to get to know so many wonderful students over the years,” Jacquemin said. “It brings me such a sense of pride and excitement to see them move on, take some of the things learned at Wright State and affect positive change in our communities and the world.”

Strang said Wright State was instrumental in preparing him for his career by offering a four-year science degree at half the cost of most major universities.

“On top of that, I was able to do undergraduate research at the water quality lab for more than two years while I was attending school,” he said.

Following graduation in the spring of 2021 with his bachelor’s degree in integrated science studies, Strang landed a job with NOAA and in May began training as an observer.

So far, Strang has worked on two fishing vessels — one in the Gulf of Alaska and the Bering Sea and the other off the coasts of Washington and Oregon. In the span of a few months, he spent time in Seattle and Kodiak, Anchorage and Dutch Harbor, Alaska, the home port for the crab fishermen on “The Deadliest Catch” reality show.

Strang said the most gratifying part of his work with NOAA is knowing that he is actively gathering important data that is being used to manage a vast fishery.

“There’s no other country in the world that manages its commercial fisheries better than the U.S., and observers are the biologists gathering the required data to ensure its longevity,” he said.