Thrill of the grill

In the bedroom of her Yellow Springs home is a blackened ember from a fire set by renowned barbecue pitmaster Rodney Scott. It’s a good luck charm for Erica Blaire Roby, who looks at it every day as an inspiration and a reminder of how far she’s come.

A Wright State University psychology graduate, Roby has had a career as a criminal defense attorney, a sought-after wine expert and most recently as a television barbecue champion.

She was named “Master of ‘Cue” after a grueling two-month “BBQ Brawl,” a competition among barbecue greats hosted by the Food Network.

Roby won the competition in April 2021, but the episode didn’t air until August. She said it was a challenge to keep the outcome from her family and friends for four months.

“I basically hid here in this house,” she said. “I did not drink around people. And I stashed the Master of ‘Cue banner away and never took it out.”

Since her victory, Roby has been doing a lot of recipe writing and working with barbecue companies. She filmed a digital series on backyard grilling with the Food Network and filmed a documentary called “The Pit Stop w/Blue Smoke Blaire” in which she toured the country in an RV and went behind the scenes at barbecue restaurants.

Roby is planning to do a popup at Miami Township Fire-Rescue in Yellow Springs because the firefighters had to be on hand when she filmed the grilling series in her backyard. She said the firefighters almost had to be called into service for the flaming coffee drink. 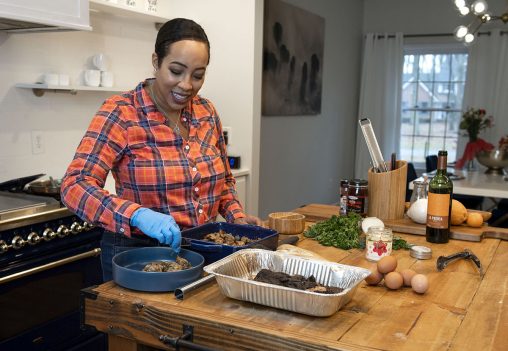 Roby says she chose to live in Yellow Springs because her best moments have always been there — from going there to have heart-to-heart talks with her mother to taking her college friends to the village’s bars and restaurants.

Roby moved to Dayton in 1988 when she was 5 after her parents, who were both in the U.S. Air Force, were transferred from Nebraska to Wright-Patterson Air Force Base. Her mother enrolled Roby in a summer enrichment program at Wright State.

Roby remembers the first day lining up in front of Rike Hall to go to class.

“I knew for some reason — even at such a young age — that I was going to be going to Wright State,” she said. “I knew this was where I was supposed to be. I never forgot that. I didn’t want to go anywhere else.”

After graduating from Hawaii Prep Academy on the Big Island of Hawaii in 2002, Roby returned to Dayton to attend Wright State and major in psychology.

She had accumulated college credits in high school and was “pretty much a sophomore” when she arrived. She took up to 20 credit hours a quarter, enrolled in summer classes and graduated in 2005 with a bachelor’s degree in psychology in less than two and a half years.

One of the highlights for Roby was serving as a teacher’s aide in a child psychology course, teaching and helping other students succeed.

“Wright State enabled me to figure out what I wanted to do and how I wanted to do it,” she said. “That empowered me to know I had the skills to take control and ownership of anything I do in life.”

After graduating from Wright State, Roby went to law school at Rutgers University, graduating in 2008. Then she began interning at the public defender’s office in Miami, Florida, and working a document-review job in the evenings. She remembers nights sleeping in her car and reporting back to the public defender’s office in the mornings to avoid what was a long commute.

After passing the bar exam, Roby applied for a job at the public defender’s office and got it over 270 other applicants.

“After working so hard at Wright State and taking crazy courseloads, the workload didn’t deter me,” she said. “My favorite was doing juvenile cases because I really want to help kids.” (To this day she represents juveniles pro bono.)

A few years later Roby started her own law firm but sold it after getting married and moving to Tampa. She then took what would be a major shift in careers when she landed a job at a wine and cheese bar, where she learned about wine and running a restaurant.

That led her in 2013 to a culinary school in the San Francisco area. After winning certification as a sommelier, she started working at the Durant and Booth winery in Napa, then was hired as the assistant wine director at the Marriott Hotel in San Diego. There, she was able to study the recipes and techniques of the Marriott chefs and would practice at home. 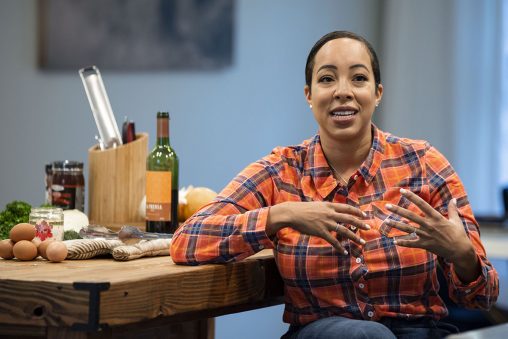 After getting remarried, Roby moved to Yellow Springs in 2020 with the idea of starting a barbecue restaurant with her father.

“I used to grill a lot with my dad,” she said. “We used to throw down when I was younger.”

Then she rented an Enterprise truck, loaded it up with her grilling equipment and set out for a barbecue competition in Hazzard, Kentucky, under the name Blue Smoke Blaire.

“When I first said the name out loud, I felt like I breathed life into something,” she said. “It was visceral. I knew I had just said for the first time who I am and who I’m going to be.”

In the competition, Roby worked alone and competed against 44 other teams. She finished last.

“But I didn’t get disqualified, I finished, and I had my first competition under my belt,” she said.

Roby continued to enter competitions, posted photos of her dishes on Instagram and connected with the barbecue community online.

One day she received an email from a casting director inviting her to apply to compete on a barbecue television show and to send in her recipes.

“I was a new kid on the scene and I got looked at,” she said. “That motivated me.”

In January, she received a phone call from the casting director, who told her she was invited to the competition in Austin, Texas, in February that would last up to two months. When she arrived on the set, she learned it was a Food Network competition called the “BBQ Brawl” pitting some of the nation’s top barbecue chefs against each other. Television celebrities Bobby Flay, Michael Symon and Eddie Jackson were all there to oversee the action.

During her first challenge, still star-struck by all the celebs, Roby badly cut her finger.

“There was blood everywhere,” she said, adding that she shouted for a medic. Although she survived the cut and the first few challenges, she never unpacked her suitcase at her hotel because she feared the end would come at any moment. 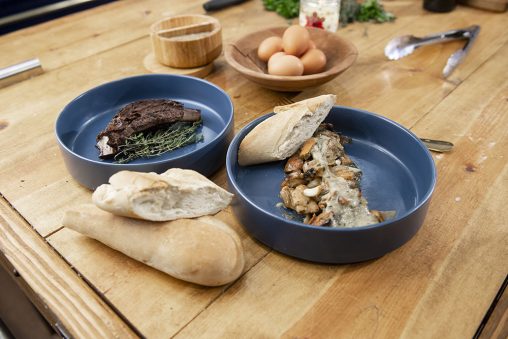 But in the sixth week of the competition, Roby suddenly became fearless after talking to her father, who reminded her that she was there not just for herself but to represent people of her gender, her race and the citizens of Ohio.

During the penultimate challenge, Roby took the ember from the fire that Scott had made on the set and kept it in her pocket as a good luck charm. Scott is a barbecue pitmaster from South Carolina who began barbecuing at age 11 and in 2018 became only the second pitmaster to win a James Beard chef award.

Roby meant to show it to Scott after she was eliminated but never had to. Her winning dish in the finale were ribs swabbed with a Moroccan and Cuban sauce.

Roby describes her barbecue as Louisiana-style.

“We bring a lot of Louisiana because that’s just the way I was taught to cook,” she said. “Everything has a Creole flair to it. It’s not that spicy. We’re more herb-based, using dry, savory herbs. Lot of paprika. And we do tons of different sauces on the side.”

Roby said Wright State has been instrumental in her success.