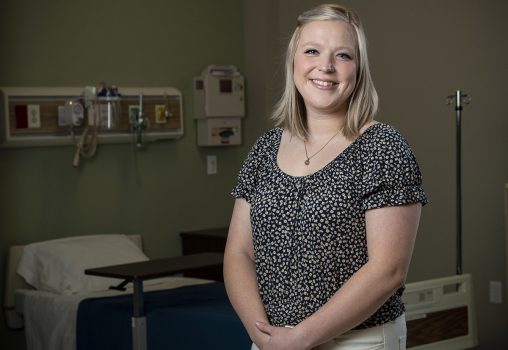 Kayle Heckler, who earned a bachelor’s degree in nursing from the Lake Campus, cares for stroke patients at Mercy Health-St. Rita’s Medical Center in Lima. (Photo by Erin Pence)

“There is nothing like seeing a stroke (patient) recover,” said Heckler. “People come in and can’t use their left side and a month later you see them in rehab and they’re using both hands to tie their shoes. It’s just incredible.”

She recalled one recent stroke patient whose entire left side was paralyzed when he arrived at the hospital.

“He could barely say a word,” she said. “A month-and-a-half later he walked down to our floor from rehab and sang us a song.”

Heckler grew up in the tiny western Ohio village of Mendon. She remembers becoming interested in nursing at the age of 13 when she was babysitting for a 5-month-old who had health problems.

“The family trusting me to care for this child at 5 months old when I was 13 — that’s a lot of responsibility,” she said, “but actually I loved it.”

Heckler’s interest in neuroscience grew from the experience of her father suffering a traumatic brain injury from a car accident when she was in third grade.

“I just I realized that I love the brain and I love to figure out how things work,” she said. “The brain is just so incredible. You learn something new about it every single day.”

Heckler graduated in 2015 from Parkway High School in Rockford as the valedictorian of her class.

She enrolled at the Wright State Lake Campus, and as a high school valedictorian received a full-tuition scholarship.

“It was everything I wanted,” she said. “I wanted nursing, a bachelor’s degree.”

Heckler was part of the first class in the Lake Campus Nursing Program to graduate and the first in her family to graduate from college.

“Wright State gave me all the tools that I needed to be a good nurse,” she said, applauding the simulation lab and the support of the instructors. “I never felt like I was alone.”

Lynn Franck, nursing educator and clinical instructor, said she knew Heckler was going to be a special student the moment she first walked into the classroom.

“She had this incredible thirst for knowledge,” said Franck. “She not only wanted to understand the concepts presented in class, she delved deeper, making the connections to understand how one piece of information influences other areas of the body. She provided high-quality compassionate care to all of her patients. I am extremely proud of her.”

After graduating from Wright State in 2019 with a bachelor’s degree in nursing, Heckler landed a full-time nursing job at St. Rita’s on the neuroscience unit, a place where she had done her clinical rotation and preceptorship.

Heckler still works on the neuroscience unit but is also house supervisor, overseeing operations at the hospital during the night shifts. She has also become an evidence-based scholar and leads a research project on post-stroke depression.

The goal of the research, which is still in progress, is to screen stroke patients for depression when they first arrive at the hospital by having them fill out detailed questionnaires. Their responses would be presented to their physicians, who could treat them appropriately and head off the possibility of patients refusing rehab or showing no interest in trying to improve their conditions.

“She not only taught them the things they needed to know, she imparted on them her love and passion for the profession of nursing,” said Franck. “She did an incredible job. It’s great to see her come full circle and give back to the Lake Campus Nursing Program.”