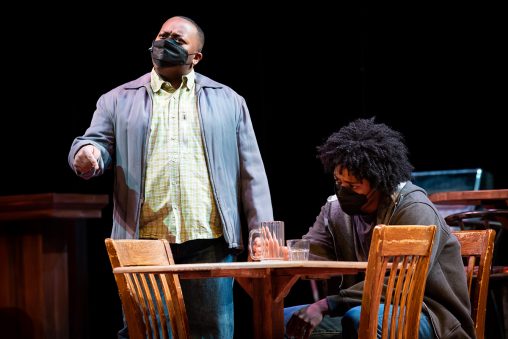 “Sweat” introduces audiences to the lives of industrial workers in Reading, Pennsylvania, who face the end of their livelihoods as their factory jobs disappear and their families and friendships struggle to survive. (Photos by Erin Pence)

Performances originally scheduled for Feb. 3–6 have been canceled because of the winter storm. Patrons can reschedule for the new performance dates by contacting Box Office Manager David Emery at david.emery@wright.edu.

“Sweat” introduces audiences to the lives of industrial workers in Reading, Pennsylvania, who face the end of their livelihoods as their factory jobs disappear and their families and friendships struggle to survive.

Wright State’s production is guest directed by Shaun Patrick Tubbs, who graduated from Wright State in 2002 with a Bachelor of Fine Arts in Acting.

“Sweat” tells the story of people who do not often have a voice and must make difficult choices just to survive, he said.

“The truth of the matter is until you’ve had everything you know taken away, you don’t know what choice you would make,” Tubbs said. “And that’s what they’re going through in this play.”

Tubbs is a New York City-based director whose work has been produced at the Juilliard School, New York Theatre Workshop, The Signature Theatre in Arlington, Virginia, and many other theatres and opera companies nationally. He has performed locally at The Human Race Theatre Company.

Tubbs said returning to Wright State to direct “Sweat” reminded him of why he works in theatre.

“It’s about learning how to learn,” he said. “My hope is that I can help these students realize the gap between where they are now and where they want to be — their dream — is much smaller than I thought it was when I was a student at Wright State.”

Wright State’s production of “Sweat” is made possible, in part, through support from Wright-Patt Credit Union and Richard and June Smythe.

Wright State Theatre’s season continues “The Gondoliers” from Feb. 18–27 in the Herbst Theatre and “Sweet Charity” from March 18–April 3 in the Festival Playhouse.