Wright State University will commemorate the 150th anniversary of Paul Laurence Dunbar’s birth with a series of film, poetry, art and music events during Spring Semester.

Organized by the Wright State University Libraries and Friends of the Libraries, Paul Laurence Dunbar: 150 offers an opportunity to explore Dunbar’s life, work and legacy.

Paul Laurence Dunbar: 150 includes a screening of a documentary on the poet’s life and work; a book discussion; a poetry and art event for students; a dramatic presentation and talk on Dunbar’s life; and a music festival, hosted by Wright State’s School of Music, supporting the work of diverse composers.

“Dunbar’s writing inspired many other artists and writers, including Langston Hughes and Maya Angelou. It’s exciting to offer an opportunity for the next generation of writers and artists to carry on that legacy in their work and to celebrate their accomplishments,” said Mandy Shannon, associate university librarian.

Dunbar was a prolific writer and one of the first influential Black poets in American literature.

He was born in Dayton on June 27, 1872, to parents who were enslaved prior to the Civil War. He attended Central High School, where he was the only African American in his class and was a classmate of Orville Wright. Dunbar started publishing his poems in his high school newspaper, serving as editor, as well as in local Dayton newspapers.

He self-published his first collection of poetry, “Oak and Ivory,” in 1893. As his success and notoriety grew, he continued to write and perform his poetry around the United States and internationally. 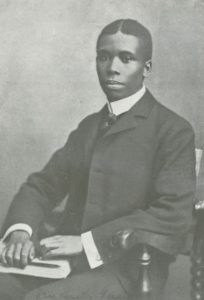 He was internationally acclaimed for his dialectic poetry in collections such as “Majors and Minors” and “Lyrics of Lowly Life.” His best-known poems are “We Wear the Mask” and “Sympathy” (the last line of which became the title for Maya Angelou’s “I Know Why the Caged Bird Sings”). He also wrote novels, short stories and essays about civil rights, Jim Crow laws and lynching.

Although he died at 33, Dunbar’s writings left a legacy that endures today.

In 1992, Wright State’s main library was renamed in recognition of Dunbar’s significant literary contributions, importance to Dayton and friendship with Wilbur and Orville Wright for whom the university is named.

The Special Collections and Archives in the University Libraries hold several small collections on Dunbar. Learn more at libraries.wright.edu/special/dunbar.

The University Libraries’ Dunbar series is inspired by the National Park Service’s Dunbar 150 project, which was organized to highlight Dunbar’s literary contributions and to raise awareness of his life and legacy.

“It was a natural fit for us to join in the project as a library named for this influential author and with an organizational mission that includes fostering life-long learning in our diverse community,” Shannon said.

“Paul Laurence Dunbar: Beyond the Mask” screening and discussion with filmmaker Frederick Lewis
Feb. 17, 3 p.m.
441 Dunbar Library and on Webex

The University Libraries will host a screening of the documentary “Paul Laurence Dunbar: Beyond the Mask,” Released in 2018, the documentary highlights Dunbar’s personal life and career. Registration is required.

Frederick Lewis, the documentary’s writer and director, will introduce the film and lead a post-screening discussion. Lewis is a professor in the School of Media Arts and Studies and director of the Screenwriting and Documentary Storytelling Programs in Ireland and Spain at Ohio University.

The University Libraries Book Club, sponsored by the Friends of the Libraries, Alumni Association, and the Retirees Association, will discuss Dunbar’s novel “The Sport of the Gods.” The book tells the story of Berry Hamilton, an emancipated Black man working for a white employer, and the ripple effects on his family and those around them when Berry is accused of stealing money from his employer’s safe. The book club meets virtually on Webex. Register online.

Students from Wright State and local high schools (grades 9–12) are invited to submit original poetry or visual art inspired by Dunbar’s work. Friends of the Libraries board members will review all submissions and award distinctions in each category.

Student submissions will be shared at a reception at Dunbar Library on Friday, April 15, at 4:30 p.m. The event will feature presentations from the Northmont High School Drama Club and performances by Wright State School of Music students.

Students can submit original poetry and art now through March 16.

“Paul Laurence Dunbar, a Celebration of the 150th Anniversary of His Birth” will feature Herbert Woodward Martin, professor emeritus of English from the University of Dayton. The event will include a dramatic presentation and discussion.

Check the University Libraries’ blog for details and registration information.

Hosted by the Wright State School of Music, Silver Melted into Sound is a music festival for concert band, vocal ensemble and string orchestra designed to support the programming of diverse composers.

Ensembles will perform in front of a panel of adjudicators then meet with a composer for a discussion about the importance of having many voices represented in music literature and the value of performing works by underrepresented composers.

Silver Melted into Sound will also feature a composition contest designed to increase repertoire written by people of color, women, and other marginalized genders and draw attention to Paul Laurence Dunbar.