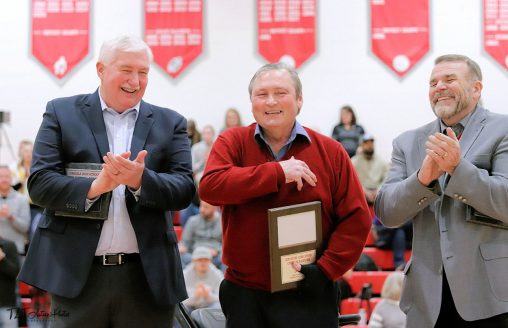 Before tip-off of the Carlisle High School boys’ varsity basketball game on Feb. 5, the home team honored their local basketball hero with a five-minute standing ovation after announcing the high school’s basketball court will now be known as Eddie Crowe Gymnasium.

“I just couldn’t believe it,” said Crowe. “Carlisle High School and Wright State have been a huge part of my life.” 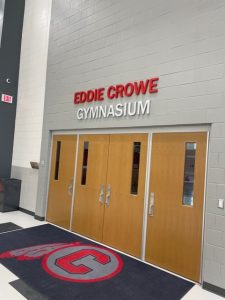 Plaques in the lobby and large signage above the doors greet visitors as they enter the basketball court, and this summer Crowe’s name and signature will be added to the wood floor.

“His name is all over this town and he’s kind of our guy,” said John Augustine, a Wright State alumnus and athletic director at Carlisle High School.

After a terrific high school career during which he played on three sectional teams and twice was named the Southwestern Buckeye League Player of the Year, Crowe was a four-year starter on the Wright State men’s basketball team from 1977 to 1981. He finished his college career with 1,112 points and ranks fifth all-time in assists with 437 for the Raiders.

Crowe was inducted into the Wright State Athletics Wall of Fame in 2006.

“I’ve been around long enough that I’ve heard Eddie Crowe’s name for 20-plus years as a Raider legend,” said Bob Grant, athletic director at Wright State.

After his college basketball career, Crowe coached youth basketball in Carlisle, stressing hard work, respect and basketball fundamentals. He formed several boys and girls traveling basketball teams called Youth Hoops so kids from Carlisle could compete against teams from around the Miami Valley.

“I wanted to try to do something where the kids could be successful, teach them about basketball and a little bit about life,” said Crowe. 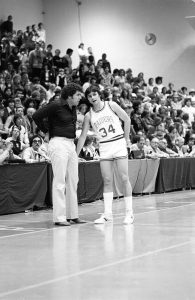 Crowe said the great coaches he played for at Wright State, including Marcus Jackson, Bob Grote, Ralph Underhill and Jim Brown, were a huge influence on how he coached youth basketball.

“I was always a believer in working hard in practice and giving it all you got in the game, and that’s what I was taught,” said Crowe.

Brown, who coached men’s basketball at Wright State for 27 years, credits Crowe for turning the Raider program around. “When did we turn the corner in recruiting?” said Brown. “When we signed Eddie Crowe.”

Grant said it never takes too long for someone to mention Crowe in conversation.

“When you talk to people that know Eddie, the first thing out of their mouth isn’t that he was a great basketball player it’s that he’s a great man and a phenomenal human being,” said Grant. “To have that kind of character that transcends what was a hall of fame career here, I think speaks volumes to what kind of man he is.”

During the gym-naming ceremony, Crowe told the crowd that he has one regret: he will never be able to play a game in the gym because of his health. He recently had surgery on his foot and uses a rolling walker to get around.

Crowe said he’s looking forward to watching his three grandchildren, Maggie, Lily and Sam, play basketball in the Eddie Crowe Gymnasium one day. “For them to be able to play in that gym one day will be pretty special,” he said.

When they get there, they will certainly be well-coached.