Strike up the bands

Adding to the sights and sounds of Wright State University men’s and women’s basketball games is the Raider Pep Band. Adding to the band at select games this season is a series of local high school pep bands.

The pairing of collegians and high schoolers is good for both levels of pep bands, and it is hoped eventually for Wright State.

Having local high school pep bands join the Wright State unit is not new, but the level of involvement is.

“This happened off and on before I started as a graduate teaching assistant,” said Matt Weaver, who is now an adjunct faculty member in the Wright State School of Music and director of the Raider Pep Band.

He said three years ago he emailed and cold-called several local high school band directors, a couple of whom brought their pep bands. Because of pandemic restrictions last season, not even the Raider Pep Band performed.

However, this season four local high school pep bands are participating. The result is harmonious.

Weaver, who earned a bachelor’s degree in music in 2013 and a master’s degree in conducting in 2021 from Wright State, said the high schoolers, usually about 20 to 30, are integrated side-by-side with the Raider Pep Band, also numbering about 20. The high school students’ director coordinates with Weaver on music, and Weaver takes over during the game.

Contrary to what people may think, the Raider Pep Band is largely composed of students majoring in fields other than music. They play for the fun of adding to the game atmosphere. They also mostly are local, which is how Weaver got the names of area band directors.

“They like to be the mentors. We get all sorts of skill levels in pep band and in high school,” he said. “This is good for the Raider who wasn’t first chair but now can mentor a high schooler.” 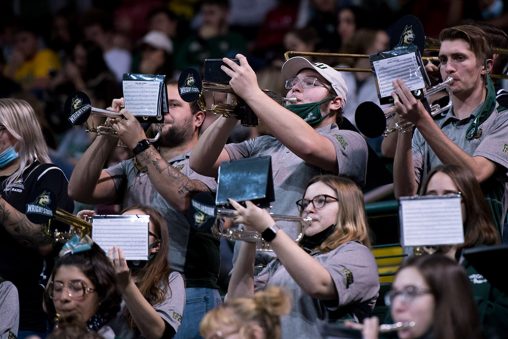 The parents of the high school musicians often attend Raider basketball games. “We usually don’t get applause when it’s just us. If we have a high school with us, we get applause,” Weaver said.

Weaver uses this arrangement to recruit students to Wright State and the band.

“I hand out cards with QR codes so they can get more information about Wright State as a whole,” he said. “But I also want them to be part of the Pep Band program.”

The reason he champions this cause goes back to his own high school days.

“I remember that when I was in a high school band in Tennessee, we played with a college pep band,” Weaver recalled. “The college atmosphere is big and exciting. It’s a neat experience, and a neat memory to make.”

Even now, Weaver said, “sometimes I’ll pull out my trumpet and join in.”

The upcoming games where high school pep bands will join the Raider Pep Band at the Wright State Nutter Center:

Then comes the Horizon League Tournaments, where the Raider Pep Band will perform on its own. But, Weaver added, “I’d love to have the high schools play with us every single game.”