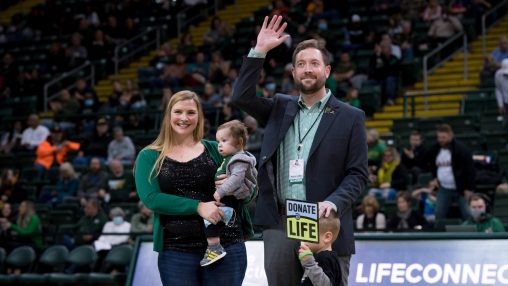 Brandon Hays, associate athletic director of external communications, and his wife and two children wave to Wright State basketball fans at the Nutter Center on Feb. 26.

When Brandon Hays and his family walked onto the basketball court during a timeout at the Wright State University Nutter Center on Feb. 26, it was the culmination of a 12-year-long battle that began on the hardwood.

“It was unbelievable,” said Hays, associate athletic director of external communications at Wright State. “Being out on the court and showing people this is who I am and this is why we’re doing this and I’m a testament to why this stuff is important.”

Hays, who is a two-time kidney transplant recipient, was celebrated at the game for his efforts to recruit fans to register as organ donors with Life Connection, a nonprofit organization that promotes and facilitates organ donations.

In March 2010, Hays was diagnosed with IgA Nephropathy, a rare kidney disease that over time hampers the body’s ability to filter waste from your blood.

“I started exhibiting systems when I was sitting at a basketball game at the University of Memphis,” said Hays, who was unable to move his legs from the knees down had to go to the hospital.

In August 2011, he received his first living kidney donation from his father, Ron, who had to lose weight and change his diet before the transplant surgery.

“He’s incredible. It changed his life for the better,” said Hays.

Eight years later, Hays was enjoying life as a husband and father when his donated kidney began to fail. With his kidney operating at only 20%, he was added to a kidney donor list in October 2018.

He was only on a donor list for 11 months when he received a call that he had a donor kidney from a 16-year-old boy. The transplant took place at UC Health in Cincinnati.

“It’s amazing how quick you bounce back after a transplant,” he said. “Within a week after the transplant you wake up quicker, you look different, and you have color in your face.”

Since the second transplant, his kidney function is close to normal. Hays and his wife added another child who he says wouldn’t exist if he didn’t have the transplant.

Hays got the idea of partnering with Life Connection to recruit donors at Wright State games from Dan Bitler, a Wright State basketball season ticket holder whose wife, Treva, is a transplant recipient.

When the Raiders battled Robert Morris in front of 3,600 fans at the Nutter Center on Feb. 26, Life Connection was on hand to sign up fans to be organ donors.

During breaks in the game, the crowd heard stories about the importance of organ donation from recipients like Hays and honored organ donors like Karll Williams, who died in 2014 but saved numerous lives through his donations.

Hays said if only one person signed up to be a donor at the game it was worth it because it could be lifesaving for someone.

“I’m fortunate to have a platform where I can pull all of this together and make it happen,” he said. “What a great way to give back.”

Hays plans to have Life Connection at every men’s basketball game next season.

“I have no words to describe how lucky I am,” he said as he reflected on the journey that he’s been on over the past 12 years. “All I know to do is just keep that kid in the back of my mind and try to serve others.”