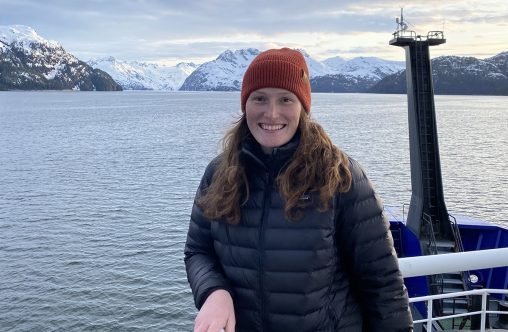 Marissa Despins, who is pursuing a master’s degree in earth and environmental sciences at Wright State, collected chemical samples to measure mercury methylation during a research cruise.

Rough seas threatened to toss her from her bunk. And the sound of breaking ice was ear-splitting. But Wright State University graduate student Marissa Despins was unbowed.

Despins, who is pursuing a master’s degree in earth and environmental sciences, was part of a scientific mission near the top of the world that may benefit the environment and human health.

Despins took a two-month research cruise last summer, collecting chemical samples in the Gulf of Alaska, the Bering Sea and the Chukchi Sea, which is part of the Arctic Ocean.

The research cruise was Despins’s first. Due to the COVID-19 pandemic, everyone had to quarantine for two weeks in Alaska prior to boarding the R/V Sikuliaq. The 261-foot-long University National Oceanographic Laboratory System ship is owned by the National Science Foundation and operated by the University of Alaska.

Despins said a research cruise is like summer camp for scientists.

“You are immersed in a collaborative environment and get hands-on research experience throughout a wide range of disciplines,” she said. “It’s so much fun collecting your own samples and helping other scientists with their sample collection and processing.”

Despins’s research involved the measurement of mercury methylation. Most of the mercury in the environment is from human sources — half of it from the burning of coal. Once mercury falls into the ocean with rain, bacteria can transform it into methylmercury, the form that can accumulate in fish. Nearly all of the mercury in humans comes from the consumption of marine fish.

The nervous system is sensitive to all forms of mercury, especially methylmercury. Exposure to high levels can permanently damage the brain, kidneys and developing fetus. Effects on brain functioning may result in tremors, changes in vision or hearing and memory problems.

“We strive to understand the physical and chemical drivers of mercury methylation to put together a cohesive story that not only aids in environmental decisions but also those regarding public health,” said Despins.

She said the one constant on the cruise was sample collection and scientific collaboration.

“Sample collection could happen during the day or at night. It depended on when we arrived at the sampling site,” she said. “The duration of my working day/night would fluctuate as the operations changed throughout each leg.”

One floor of the ship is designated for laboratory research. It features a wet lab, dry lab, analytical lab and a computer lab. Despins collected and processed samples in the “clean bubble,” a plastic-lined room fed with air from high-efficiency particulate filters. 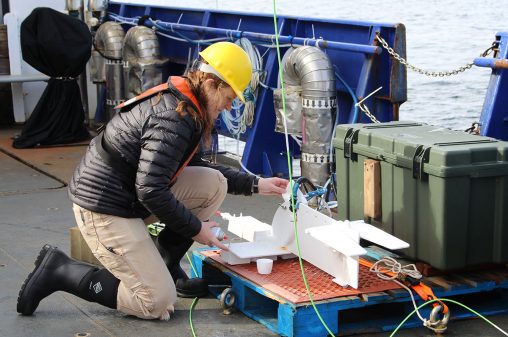 The research cruise provided Marissa Despins with a collaborative environment and hands-on research experience from a wide range of disciplines.

“It is important that we process samples in a clean environment and collect using clean gear because the metals we are analyzing exist in minute concentrations,” she said. “There is a high chance of contamination, especially on a metal ship.”

The ocean would occasionally remind Despins of where she was.

“Many nights when the ocean was rough, I had to wedge myself between the wall and pillows in my bunk so I wouldn’t slide around,” she said.

R/V Sikuliaq is an ice breaker that can crash through first-year ice up to 2.5 feet thick.

“I distinctly remember one night when we were breaking through ice. It sounded like ice was ripping through the side of the ship,” said Despins.

The ship has a desalination system to give the scientists a steady supply of freshwater. But the vessel twice returned to port during the cruise to take scientists aboard and take on fuel and supplies.

“The food was amazing,” said Despins. “Even after 30 days, when the food rations were mainly canned goods and cabbage, the chefs still managed to make delicious meals.”

Cribbage games, a ping-pong tournament, movie nights and even a snowball fight on an ice floe broke gave scientists a break from the workload.

Despins earned a bachelor’s degree in environmental biology from the University of Wisconsin-La Crosse. She became interested in trace metal biogeochemistry while working as a research assistant in the university’s trace metal mercury lab.

“I love troubleshooting and critical thinking involved with trace metal research. It is like solving a puzzle and I find it addictive,” she said. “I love the creativity of the scientific process, posing questions and finding new innovative ways to answer them.”

Despins was attracted to Wright State by the mercury research being conducted at the university, where she works as a graduate teaching assistant. She intends to pursue a Ph.D. in chemical oceanography and hopes to become a college professor overseeing her own research lab.

Despins said Silvia Newell, Ph.D., associate professor of earth and environmental sciences, has been a strong mentor to her at Wright State.

“She encourages me to seek out new opportunities, inspires new ideas and has boosted my confidence as a female scientist,” said Despins. “Despite having a large lab and many graduate students, she ensures we each feel supported.”

Despins said Chad Hammerschmidt, Ph.D., professor of earth and environmental sciences, was instrumental in getting her a position on the research cruise, writing a strong recommendation letter to Ana Aguilar-Islas, Ph.D., a chemical oceanographer at the University of Alaska who along with University of Connecticut chemical oceanographer Robert Mason, Ph.D., was looking for a graduate student.

“Dr. Hammerschmidt saw the opportunity for my academic growth and valued the potential data obtained from unique Arctic samples,” said Despins. “My trace metal biogeochemistry research will hopefully answer questions that not only benefit the environment but also public health.”