The floor of the Wright State University Nutter Center holds a special place in her heart. The memories of performing on it as a member of the Emerald Jazz dance team came flooding back when she recently returned for a campus visit.

“I love performing and I have a passion for it,” said Wright State alumna Ayauna Goodwin. “To be in the middle of the floor entertaining the crowd; just being loved by the cheers, the stadium, the kids that would come down to us.”

Dance is still very much a part of things for Goodwin, who graduated from Wright State in 2020 with a bachelor’s degree in liberal studies with a minor in Spanish and a certificate in diversity and social inequality.

She currently performs for Pones, a Cincinnati-based dance company that provides artistic opportunities for community growth by creating engaging ways for audiences to experience dance and performance art. Founded in 2008, Pones creates site-specific performances through a fusion of movement and dance with other art forms.

The dancers have performed with international musicians in music videos, done pop-up performances and flash-mob dancing, and partnered with social justice nonprofits. They have performed for schoolchildren, business professionals, military veterans and hospice patients. 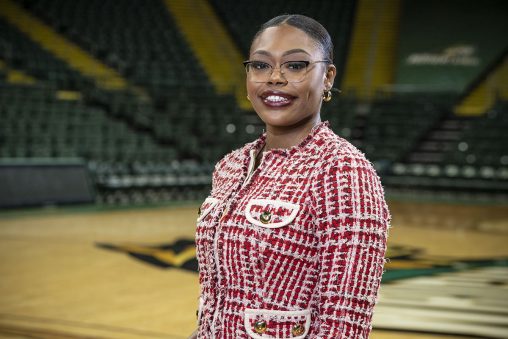 Pones’ performances have been seen in over 90 Cincinnati-area locations as well as in Indianapolis and Chicago. Goodwin recently performed at an event that featured a mural in Covington, Kentucky.

Goodwin grew up in Cincinnati, where she started dancing and ballet at the age of 5. She joined Uptown Arts, an after-school program, and fondly recalls becoming a quick-change artist in the back of her mother’s van during the fevered rush from school to dance class.

Goodwin moved on to community dance teams, cheer teams and her church’s Praise dance team. High school for her was at the Cincinnati School for Creative and Performing Arts.

“That was an amazing experience,” she said. “The hallways are filled with music, filled with singing. I was able to be in plays and musicals as well as be the captain of the cheer team. So I was very much involved in the performing aspect of the arts.”

After graduating from high school in 2016 and coming to Wright State, she joined the university’s Emerald Jazz dance team.

“I was a little bit scared because my technique wasn’t up to par as I expected it to be,” she recalled. “I was scared I wouldn’t be able to fill the requirements that they needed me to fulfill. However, I pushed myself.”

With the support of the coach and fellow dancers, Goodwin quickly found her groove.

The highlight of her time with Emerald Jazz was reaching the finals in the Division One hip-hop portion of the 2019 National Dance Alliance competition in Daytona Beach, Florida. It was a first for the team, which placed seventh.

“Finally being able to hit that finals floor — that was really nice,” she said. “I’m glad that I had that experience.”

Goodwin said she matured at Wright State, where she learned how to make new friends, received the support of faculty, and enjoyed personal growth by being involved in campus organizations. 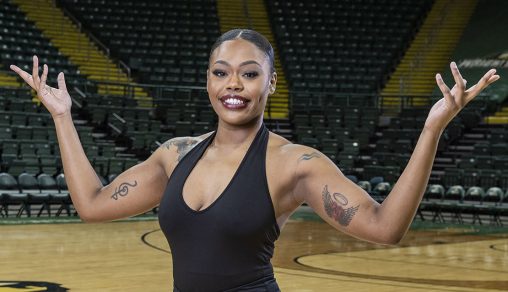 Ayauna Goodwin was a member of the Emerald Jazz when the team placed seventh in the hip-hop portion of the 2019 National Dance Alliance competition.

“It’s been this grand experience, and I’m glad I got involved versus just going to class and going back to the dorms,” said Goodwin, the first person in her family to earn a bachelor’s degree.

Following graduation, Goodwin worked as a dance and fitness instructor for Pretty Girl Fitness in Kettering, did some choreography for others and hosted her own dance classes.

“It was a learning period for myself,” she said. “It taught me how to host my own events, how to cater to different personalities.”

To give her body a break from the rigors of dance, Goodwin is working as a professional makeup artist. But she found it hard to stay away from what she loves and in November discovered and joined Pones.

“Dance is a passion of mine,” she said.