There were times when the thunderous roar of the Wright State fans seemed about to blow the roof off of the University of Dayton Arena.

The Raider faithful had a lot to cheer about as the men’s basketball team made Wright State history March 16 with a 93–82 victory over Bryant for the team’s first win ever in the NCAA Tournament.

A sea of Wright State fans and supporters clad in green and gold helped fill and tinsel the stands in the rare “home” game at UD Arena. The Raider cheerleaders cheered, the dancers danced and the players — well, they played. They really played.

Tanner Holden scored 37 points to lead Wright State in a First Four game that was tight in the first half before the Raiders pulled away in the second.

The standing ovations from the crowd began after Wright State surged with 7:50 left in the game, then at 1:40 and finally with 23 seconds remaining as the starters took a bow and came to the bench.

“I don’t think since I’ve been here we’ve played in front of an atmosphere like that, with that many people cheering for us,” said head coach Scott Nagy. “It was a tremendous experience for all of us, but I know for our players something they will never forget.” 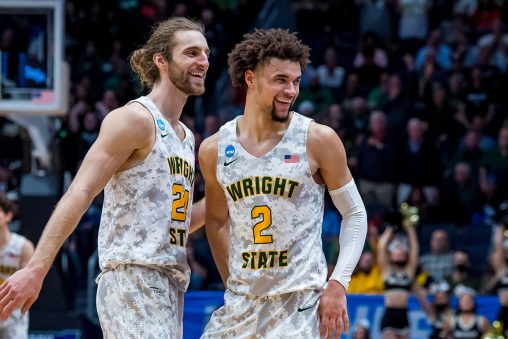 Holden said the crowd gave the team a good boost.

“Emotionally, I thought the crowd did a great job being energetic, getting into it,” he said. “It was definitely a great, great turnout.”

When the game ended, Nagy coolly walked over to shake hands with the Bryant coaches and players like it was just another day at the office. He later acknowledged that the game was intense.

Prior to the game, a tailgate party drew Wright State alumni to The Brightside Music and Event Venue. And while the game was being played, watch parties sprung up at the Wright State Student Union and Milano’s restaurant in Beavercreek.

“I’m out here because this is a really big game for Wright State, and basketball is one of those sports I know the most about,” said nursing major Lyndsi Thompson. “And I’ve got to support my team. It’s exciting.”

While Wright State had played in three previous men’s NCAA Tournament games, they had never won one. Not this time.

“It’s a lifetime moment for these guys,” said Nagy. “And it is for me too.”