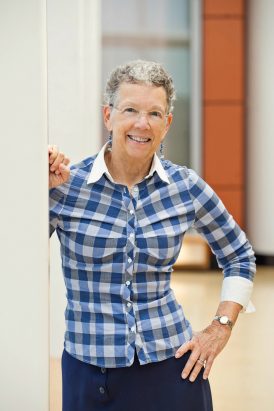 Deborah Dash Moore is a Frederick G. L. Heutwell Professor of History and the former director of the Frankel Center for Judaic Studies at the University of Michigan.

Deborah Dash Moore, Ph.D., an internationally known scholar of American Judaism, will discuss the experience of Jewish Americans in the U.S. military in World War II during the 42nd annual Ryterband Symposium in Judaic Studies at Wright State University.

Moore’s lecture, “GI Jews: How WWII Transformed American Jews,” takes place on Thursday, March 31, from 7 to 8:30 p.m. in the Discovery Room (163) of the Student Union at Wright State. The lecture is free and open to the public.

The program will also be available to watch online at wright.edu/streaming.

“This lecture should be of interest to anyone who appreciates learning about American military history, American religious history, and humanity’s ongoing struggle to confront the forces of evil and injustice in our world,” said Ava Chamberlain, Ph.D., professor of religion and chair of the Departments of Religion, Philosophy and Classics at Wright State.

Moore is a Frederick G. L. Heutwell Professor of History and the former director of the Frankel Center for Judaic Studies at the University of Michigan.

Moore’s Ryterband Lecture will focus on her work documenting the experience of American Jews serving in WWII and how this service reshaped Jewish life in the United State after the war.

“This work is especially powerful given that the experiences of these soldiers are rapidly disappearing since the generation who served in WWII is passing,” Chamberlain said.

The experience of American Jews in the war is distinctive, Chamberlain said. Jews and non-Jews served together in battle, and Jewish Americans at times had to confront the religious intolerance of their fellow soldiers.

“More important, Jewish American soldiers were not only fighting as an act of patriotic duty, they were also fighting to stop the extermination of the Jewish people in Europe,” Chamberlain said. “Jewish soldiers helped liberate the death camps and experienced the horror of the Nazi death machine in a unique and personal way.”

Moore is also the author of numerous works on the modern American Jewish experience, including, “Jewish New York: The Remarkable Story of a City and People,” “New York Jews, City of Promises: A History of Jews in New York” and the forthcoming “Walkers in the City: Jewish Street Photographers of Mid-Century New York.” In recent years, Moore has focused on teaching and studying documentary photography.

The Ryterband Symposium is a major ecumenical program co-sponsored by the University of Dayton, United Theological Seminary and Wright State University. The host for the symposium rotates each year among these three institutions. The goal of the symposium is to promote mutual understanding between religious traditions, as well as advance social justice by exploring the interface between religious communities and the broader society.

The annual Judaics Symposium began in 1978 under the leadership of Sanders Professor Emeritus Eric Friedland. Since 2000, it has been coordinated by Mark Verman, Ph.D., Zusman Professor of Judaic Studies at Wright State. It was originally known as the Sanders Symposium and has since been endowed through the generosity of Dr. and Mrs. Louis Ryterband and Mrs. Natalie Roth.