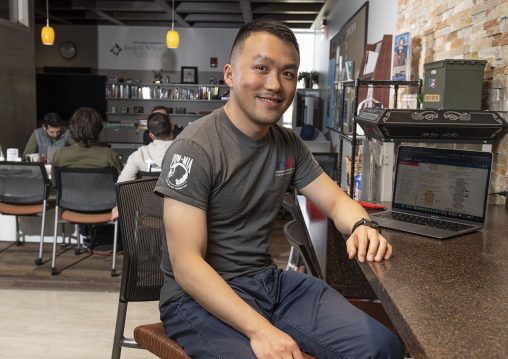 Weilong Wang, an Army Reserve soldier and a first-year student at the Wright State Boonshoft School of Medicine, and other medical students spend all of their time outside of class studying in the Veteran and Military Center. (Photos by Erin Pence)

Scrawled in red, green and black on a whiteboard in the Wright State University Veteran and Military Center are equations and chemical formulas relating to diuretic medicines.

It’s the work of a study group of medical students organized by Weilong Wang, an Army Reserve soldier and a first-year medical student at the Wright State Boonshoft School of Medicine.

Wang and his fellow medical students spend a lot of time at the VMC — a lot of time. They are often there from sunup to sundown because they find it such a perfect study space.

“You can see how hard they’re working,” said Seth Gordon, Ph.D., director of the VMC. “Having that energy in here just creates a more academic space.”

The Veteran and Military Center, which opened in 2014, sits at the intersection of Allyn and Millett Halls and features a stone façade with large bronze medallions representing each branch of the U.S. armed services.

With 4,500 square feet and about 1,800 feet dedicated specifically for a student center, the Veteran and Military Center is designed to be a space where veteran and military students can get the support they need to process their benefits, but also relax and study in a place where they can mix with fellow veterans.

Gordon said the VMC is designed to create a sense of belonging, camaraderie and community, which in turn results in academic success.

“I am so proud of the space we’ve designed — the flow of the way it works, the space for people to learn,” he said. “I think that is special.”

Wang learned about the VMC from a fellow medical student and Navy veteran who recommended it.

Wang said he loves to study at the center because it is a quiet space, is open around the clock, he can hold group study sessions with other medical students, and he is embraced and supported by the veterans and staff at the Veteran and Military Center.

He often arrives at the VMC at 8 a.m. and doesn’t depart until 9 p.m., leaving only for classes and meals. He is often joined by four or five other medical students and sometimes as many as 10. Some, but not all, are military veterans.

Wang’s fellow medical students said the center is spacious, quiet, comfortable, airy, welcoming and provides an environment that helps them to focus on their studies, exchange ideas and bond as a group.

“If Will needed to bring his friends in because they were going to make him succeed, then my attitude was bring them all,” said Gordon. “My job is to help veterans be successful. I know veterans aren’t successful alone. If they have a group, I’m going to support the whole group.” 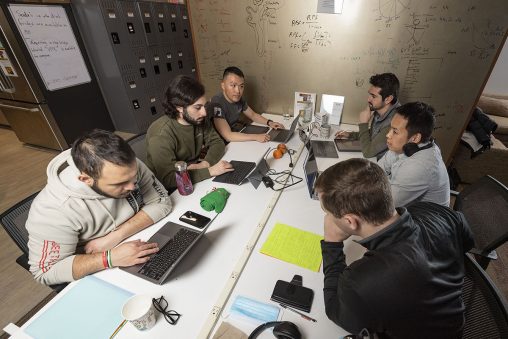 Weilong Wang and his fellow medical students are often in the Veteran and Military Center from sunup to sundown because they find it such a perfect study space.

Wang grew up in Wuhan, China, in a working-class family. He said his grandfather suffered from dementia and had a serious stroke that put him into a coma.

“The final days of his life were just terrible,” said Wang. “My parents always tried to make me a strong person. But I still remember the moment I saw a bunch of nurses and doctors in the room who tried to bring my grandfather back from the coma. It was just scary. I almost wept. I just ran out of the room. The image is still there. It’s very difficult.”

The experience helped reinforce Wang’s desire to become a physician.

“I always wanted to become a doctor,” he said. “I want to bring value to other people’s lives. That’s a way to live for me. And I always liked science and chemistry.”

In 2014, he moved to New York City to do some “soul-searching” and try to decide if he still wanted to pursue medicine. He sold stationery before landing a job in a medical lab as a technician.

Wang decided he still wanted to go to medical school but said his path was blocked because he wasn’t a U.S. citizen. So in 2016, he joined the U.S. Army Reserve in a special program that utilized his language and medical skills. After many delays, he was granted U.S. citizenship in 2019.

“I like the environment the military provides,” he said. “They give you a sense of brotherhood. Nobody cared where I came from. As long as I did my part, they just saw me as part of the group.”

Wang then applied to medical schools and chose to come to Wright State because of the number of military veterans at the Boonshoft School of Medicine, the support they receive from the university and that some of the instructors at the medical school are veterans.

He has signed up for the Army’s Health Professions Scholarship Program, agreeing to work for the Army as a physician for each year he receives educational support from the scholarship.

Greg Toussaint, associate professor of pediatrics and a retired Air Force colonel, is one of the Boonshoft School of Medicine faculty who are veterans and an advisor for military students.

“Typically, 6 to 7% of our medical students are veterans or in the Reserves on a military scholarship. Those with prior service have been everything from medics to a Pashto linguist and a former Marine Corps sniper,” Toussaint said. “The VMC and its staff provide an additional level of support for these students far beyond anything we could provide on our own.”