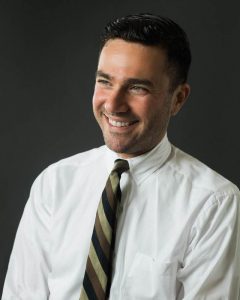 Alexander Klein is a Canada research chair, director of the Bertrand Russell Research Centre and associate professor of philosophy at McMaster University.

Klein will present his lecture, “Bertrand Russell, William James and the Politics of Truth,” on Thursday, April 7, from 3:30 to 5 p.m. in the Discovery Room (163) in the Student Union. The lecture is free and open to the public.

The lecture can also be watched at wright.edu/streaming.

Klein will discuss how debates about political nationalism shaped the development of new, science-oriented philosophies in the early 20th century. He will focus on British philosopher Bertrand Russell and American philosopher and psychologist William James, two cosmopolitans who resisted the idea that philosophy should reflect national character.

“These two men shared a broadly anti-nationalist political outlook, and not coincidentally, shared an aspiration to make philosophy more ‘scientific,'” Klein said. “But they disagreed on just how to reach this goal, producing two starkly different visions of what an anti-nationalist, scientific philosophy should look like.”

Klein was inspired to focus his lecture on James and Russell by the research of Erik Banks, the late Wright State professor of philosophy whose legacy the lecture series honors. Banks himself published extensively on both James and Russell.

“One reason I picked this theme is that I thought it would be in the spirit of Erik’s remarkable research,” Klein said.

Klein is a Canada research chair, director of the Bertrand Russell Research Centre and associate professor of philosophy at McMaster University in Ontario. His research focuses on the history and philosophy of psychology, with a special emphasis on early analytic philosophy and pragmatism.

Klein’s forthcoming monograph, “Consciousness is Motor: Warp and Weft in William James,” will be published by Oxford University Press. He began developing the book as a Fulbright Fellow at the University of Sheffield in England in 2016–2017. He is also editor of the forthcoming “The Oxford Handbook of William James.”

Organized by the Departments of Religion, Philosophy and Classics, the Erik C. Banks Memorial Lecture in Philosophy honors Banks, who was a member of Wright State faculty from 2006 to 2017.

During his tenure at Wright State, he made a major impact on both the university and the history and philosophy of science. Banks was a creative and dedicated teacher who taught demanding critical thinking and logic courses and developed such innovative interdisciplinary classes as the Philosophy of Physics, which he taught with a faculty member from the Department of Physics, and Ancient Science, taught with a Department of Classics professor.

Banks was also the author of numerous journal articles and two books, “Ernst Mach’s World Elements: A Study in Natural Philosophy” and “The Realistic Empiricism of Mach, James and Russell: Neutral Monism, Reconceived.”

Following Banks’ death in 2017, his family endowed the lecture series as a lasting tribute to his memory.