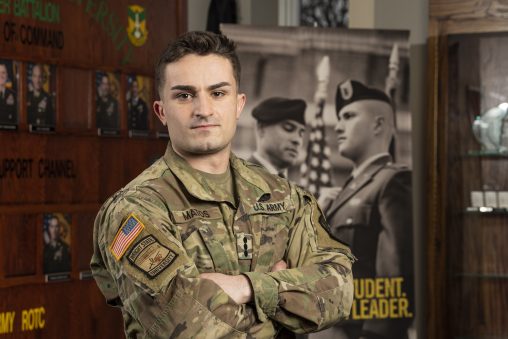 Caleb Matos, a psychology major, is set to graduate this spring and hopes to earn a master’s degree in counseling and perhaps do counseling following his military career.

Parachuting out of airplanes is what did it. Although he admitted having the jitters before his first jump, Wright State University senior Caleb Matos said the experience cemented his desire to become a U.S. Army Ranger.

The five jumps occurred when Matos, an Army ROTC cadet and psychology major, was undergoing Army Airborne training at Fort Benning, Georgia, in the summer of 2018.

Matos acknowledged being nervous before his first jump. He said many of the soldiers he jumped with were older and of higher rank and he could tell that some of them were also nervous.

But the experience got Matos thinking about a military career in combat arms and pursuing becoming a Ranger.

“It’s something I know is going to be extremely challenging,” he said.

Matos grew up in Cleveland. His father is a pastor, his mother a nurse. After graduating from Highland High School in 2017, Matos enlisted in the National Guard and went to basic training at Fort Leonard Wood in Missouri.

He then began classes at Wright State on an ROTC scholarship. “I picked Wright State because I visited the ROTC program and it seemed like it had the best opportunities,” he said. 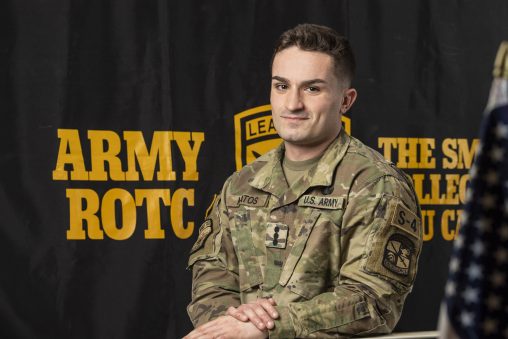 Caleb Matos said being in the ROTC has given him extra incentive in the classroom and forced him to develop strong study and time management skills.

Matos said he was initially attracted to the ROTC because of the benefits.

“But what kept me around was wearing the uniform and just participating in all of the training,” he said. “It was so fun and I liked the allure of having to stay in shape. And it just keeps you focused. I love it.”

In 2019, during his junior year, Matos interned at Joint Base Lewis–McChord in Seattle for medical training in hopes of going to medical school. During that time, he decided he instead wanted to become an officer in an Army armored unit.

Following graduation, Matos plans to return to Fort Benning for armor training and then Ranger school, which can last up to six months.

Matos majors in psychology and is set to graduate this spring. He hopes to get a master’s degree in counseling and perhaps do counseling following his military career.

“I love just helping people, trying to figure out what makes people tick,” he said. “Treating people is important to me.”

Matos, who carries a 3.6 grade point average, said being in ROTC has given him extra incentive in the classroom and forced him to develop strong study and time management skills.

“Caleb was incredibly successful as a cadet and I predict that he will be equally successful as a new lieutenant in the United States Army,” said Gonzalez. “He will become exactly the type of officer that we need in today’s military.”