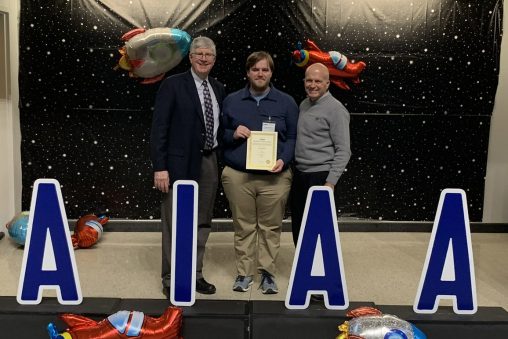 Two Wright State University graduate mechanical engineering students took first and second place at a research conference at Purdue University. Their research on hypersonic travel, or travel faster than the speed of sound, rose above hundreds of other graduate students’ work from surrounding states.

Mitch Wolff, Ph.D., professor of mechanical engineering, said that after rumors of a Russian hypersonic missile the study of hypersonic travel is gathering buzz as a field of study.

The AIAA Region III conference hosted students from Ohio, Indiana, Michigan, Illinois and Wisconsin. It is one of six AIAA conferences across the country where students present their research.

Woff said that Wright State does not participate in the conference every year, but he was incredibly happy to take a team of students this year.

“I was quite happy the students wanted to go and really happy with my two grad students,” Wolff said.

Centrlivre’s research will be published at the AIAA national conference, which will take place in National Harbor, Maryland, near Washington D.C. Centrlivre will present his research for the chance to win $1,500.

Wolff said he is looking forward to the national conference.

“I’m happy for him, it’s a great opportunity,” Wolff said. “It’s a fun time, a lot of good work will be presented there.”

Wright State and Wright-Patterson Air Force Base are partnering to host a conference on hypersonic innovations on April 26–28. The first two days of the conference will take place at the Wright State Nutter Center and is open to anyone in academia or relevant industries.

The third day of the conference is classified and requires secret clearance. Anyone who is active military or works for the government can register for free. More information is available at hic.dsigroup.org/registration.