As part of their senior design capstone project, Christopher Stutz, Reilly Matsumoto, Grant Gilliam and William Moore outfitted the vessel with an adaptive device under the direction of David Kender, senior lecturer emeritus of biomedical engineering.

“Adaptive devices can be incorporated into radio-control radios so that afflicted sailors can once again enjoy the hobby and sport of model yachting,” said Kender.

The transmitter/receiver system in a model sailboat creates a series of pulses that control the rotation of the rudder and the position motors of the sail’s winch.

Normally, the signals are controlled by a joystick; however, with the adaptive interface, persons afflicted by quadriplegia will now be able to control their own RC models using only voice commands.

The adaptive device includes the micro-controller, switches, a battery and a stripboard with soldered connections, all contained in a 3D-printed box.

Over the Fall Semester and the first half of the Spring Semester, the team of undergraduate students worked on the initial design specifications, software development, proof-of-concept, prototype implementation and finally a working operational model.

The team then worked to expand the control signals to respond to voice recognition commands, adding a microphone, a 9-volt battery and a connecting cable to the device. 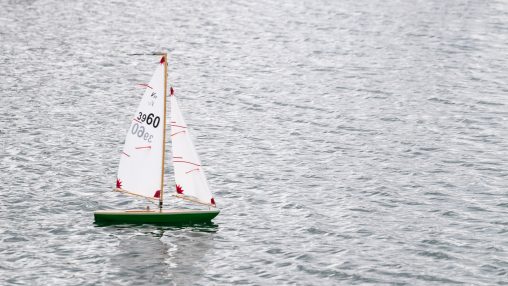 The students expect to complete the final design, implementation and documentation are expected by the end of Spring Semester. The team plans to release the results publicly so others may benefit from the design.

Although retired from active classroom teaching in 2017, Kender still serves as an advisor for Capstone Senior Design Project teams in the Wright State College of Engineering and Computer Science. Currently, he also fulfills the duties of sail master for the model yacht club.