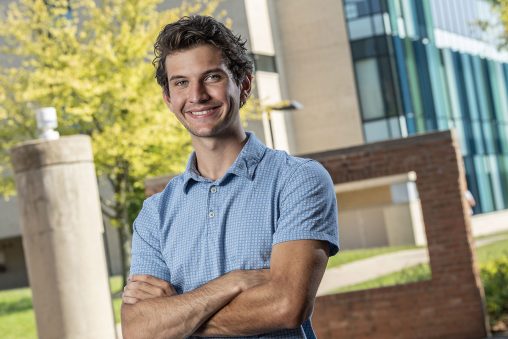 Garrett Regan will begin a biomedical engineering Ph.D. program at the Mayo Clinic after graduating from Wright State on April 30. (Photo by Erin Pence)

Garrett Regan, a biomedical engineering student at Wright State University, has been accepted into a Ph.D. program at the prestigious Mayo Clinic.

Regan will begin the biomedical engineering Ph.D. program in July after graduating from Wright State in April with his bachelor’s degree from the College of Engineering and Computer Science.

The Mayo Clinic is an academic medical center in Rochester, Minnesota, that focuses on integrated health care, education and research. It cares for more than 1.3 million people each year with serious or complex illnesses from all 50 U.S. states and 130 countries. The clinic has been ranked the No. 1 hospital by U.S. News and World Report and Newsweek magazine.

“The main attraction of going to Mayo Clinic is the ability to conduct meaningful, translational research,” he said. “This opportunity will allow me to see through my research in the lab through to clinical practice and have a real impact on patients.”

Brian Rigling, Ph.D., dean of the College of Engineering and Computer Science, said Regan has been an exceptional student and a valued member of the college for the past several years.

“He will be another example of a local student continuing their education at Wright State and then going on to do amazing things,” said Rigling.

His focus has been on the aorta, the main artery that carries blood away from the heart to the rest of the body. One of the diseases he works on is aortic aneurysm, a balloon-like bulge in the aorta that can lead to its rupture and a high death rate.

The goal is to give radiologists a better, quicker way to detect aneurysms on a computed tomography (CT) scan. The idea is to more quickly identify critical cases and get patients quickly to the operating room for what could be life-saving surgery.

Regan utilizes machine learning, the use of computer algorithms to identify the specific features of a target image to improve classification accuracy.

Regan grew up near Wilmington on an angus beef farm. After graduating from Wilmington High School in 2018, he enrolled at Wright State.

Regan said the highlight of his time at Wright State has been his involvement in Engineers Without Borders.

The group is designing an elevated observation deck for the Russ Nature Reserve in Beavercreek. The students are also involved in an international sanitation project in Uganda, working remotely until COVID-19 travel restrictions are lifted by sharing their designs with engineers in the African nation.

In 2020, Regan and the Wright State chapter oversaw the installation of a handwashing station at a secondary school in Uganda. Months after returning home, the students learned that the station had been reproduced in another area near the school.