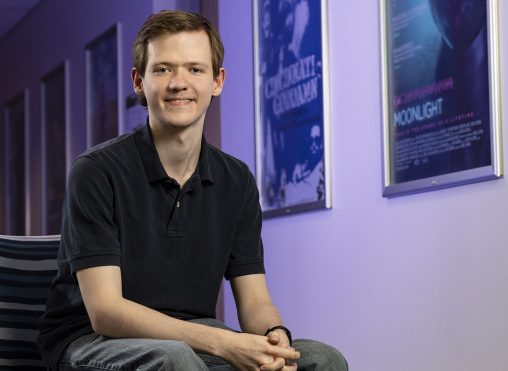 When he watched movies as a young boy, it was the musical soundtracks of the films that most impressed Jonathan Mohr.

Today, the Wright State University business major is using his love of soundtracks to compose them for motion picture students.

In just a few months, he has already composed soundtracks for a half dozen student directors and their films.

“They just really appreciate how I can help them fully manifest their vision for their film,” said Mohr.

The unusual aspect of this is that Mohr is neither a motion pictures nor music major nor anything remotely related. He majors in management information systems in the Raj Soin College of Business.

Mohr got involved in writing music for student films last semester by simply approaching a student director who was in the Wright State Actors and Filmmakers Group and offering his composing services.

Mohr said it generally takes him a week or two to compose a soundtrack.

He first watches the film with its director in a “spotting session” before beginning the composing process, using computer-generated music. The two of them decide where in the film there should be a piano solo or something slow, for example. Mohr then tries to write music that enhances the flow of the film.

“I tend to focus on the philosophy that film scores should support what the film itself is trying to shoot for,” he said. “Generally, I try to not take too much attention from the film itself. The hardest part is making sure the song’s pacing is seamless.”

So far, Mohr has composed soundtracks for “And Be Happy” directed by Brendan Borden, “Drown” by Benjamin Hollinger, “Conveyor” and “Pitch Black” by Joey Larkin, “More Than Words” by Nathan Schubert and “Normal Norman” by Derek Szklany.

Borden, who majors in motion pictures at Wright State, said he met Mohr after writing and directing his junior thesis film, which had no dialogue and very few sound effects.

“The goal of the film was to tell this story through visuals and music,” said Borden. “I could have gone to some royalty-free music site, but the film is very personal and I wanted it to have a personal score to help emotionally guide the viewer.”

Borden said Mohr had many “brilliant” ideas about what the soundtrack should be.

“It’s a gorgeous score,” said Borden. “He basically nailed everything after one meeting. It’s very light and cheery with haunting undertones. His work is truly the beating heart behind my film, and I am incredibly grateful for his help.”

Mohr has long been interested in music. He got a small keyboard from his father when he was in elementary school and wrote his first song in the sixth grade.

“It was not great at all; it was pretty terrible,” he said. “And I wrote the rare song every once in a while, but I didn’t know anything about how to actually do it properly. I was more just pressing notes and seeing what worked.”

“Something clicked” when Mohr took a music appreciation class his junior year at Troy High School. Then he took a music theory class his senior year that helped him write music more efficiently.

“It just went from there,” he said.

Mohr started composing music seriously in 2016 and composing for short films in 2019. Besides composing film scores for Wright State motion pictures students, he has also composed for companies such as Amadea Music Productions, a U.K.-based company specializing in creating music and sound effects for film, television and video games. you can listen to many of his film scores on his YouTube channel.

Wright State’s Management Information Systems Program is designed for students looking to work in businesses, nonprofit organizations and government agencies increasingly relying on data to drive decision-making and increase productivity. The program offers a broad education in core business skills such as accounting, finance, marketing, management and operations management along with emphasizing business and organizational studies and information systems technology.

Mohr currently works as a part-time office assistant for Honda in Troy. Following graduation, he would like to make that a full-time position helping the company manage the technical part of its inventory and deployment systems.

“At the same time, I plan to compose for more short films and hopefully a feature-length film at some point and also compose for film trailers,” he said.