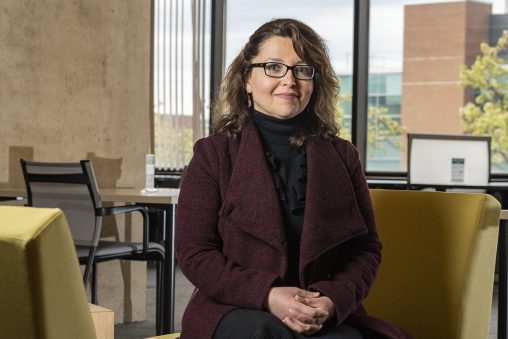 While the “Greek Freak” may play professional basketball in Milwaukee, Wright State University can lay claim to a force of nature all its own by way of Greece in the form of Margarita Ronayne.

But instead of making game-winning baskets on the court, her best scores came in the classroom.

The Greek transplant will need to use both hands to hold her diplomas as she is graduating this spring with bachelor’s degrees in psychology and biological sciences.

It will be the culmination of an eight-year journey for the married mother of four who matriculated at Wright State due to her innate sense of curiosity and desire to expand her horizons. Her time at the university has been quite rewarding.

“It’s been a great experience. … I’ve really enjoyed it,” she said. “I’ve made a real connection with the departments, the professors and my fellow students.”

Following high school, Ronayne left her hometown of Athens for Germany where she pursued her love of languages and received a degree in applied linguistics from the University of Mainz. While in Germany she also met the man she would eventually marry, who was stationed there as a member of the U.S. Air Force.

The couple and their three sons eventually moved to Dayton in 2007 where shortly following, their daughter was born.

“With four young children, work was not an option for me initially,” she said.

Her sons (ages 23, 21 and 16) have all been diagnosed with Autism. Ronayne said that her sons fall in the moderate/severe Autism spectrum and experience difficulty with communication, social interaction and anxiety.

“It’s our normal — we don’t know any different,” she said. “We’ve just learned to face it and navigate around it.”

As her kids got older and her curiosity piqued, Ronayne sought new challenges and wanted to take advantage of the academic options the Miami Valley had to offer. Never having been good with numbers, she took some math courses at Sinclair College to see how she would fare.

Subsequently, she wished to increase her knowledge of Autism and genetics and through her husband’s G.I. Bill, enrolled at Wright State where she admittedly bit off more than she could chew in the beginning.

“I tried to squeeze in as much as I could, and I crashed and burned a lot of times,” Ronayne said.

Initially, she took 17 credit hours per semester but found that between 9-12 hours was her sweet spot. And while COVID-19 has proven to be a dark cloud hanging over virtually everyone, she found it to be a blessing of sorts as the greater offering of remote course options fit in perfectly with her bustling school/home schedule.

It has been an unconventional path followed by a nontraditional student who rubbed elbows with classmates, many of whom are the same age as her children. But she has persevered throughout.

“I am especially proud of Margarita,” said Paula A. Bubulya, Ph.D., professor and associate chair of the Department of Biological Sciences. “She has developed tremendously as a scientist during her many years in our programs. I watched her growth from having a relatively rudimentary understanding cell/molecular biological pathways to the point of being able to critically evaluate clinical molecular genetics work published in top-tier journals in our advanced classes.”

Because her interests were so varied, through her pastiche of classes Ronayne earned enough credits to earn degrees in two separate academic disciplines.

Asked how she might blend the two, she had an obvious answer: “Neuroscience,” she said. “I’ve lived it for more than 20 years so I have the insights.”

Ronayne wishes to lead by example and is hopeful that her daughter, a first-year student in high school, will perhaps follow in her footsteps.

So does she envision a return to the classroom in the immediate future?

“I need a minute,” she said about jumping right back in to academia.

When not in the classroom, Ronayne busies herself by baking, being involved in her children’s activities, teaching Greek classes and is an active member of the local Greek Orthodox Church community.