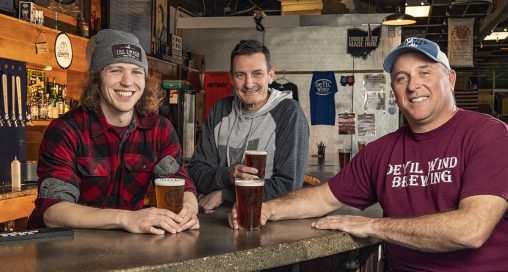 The three friends and Wright State alumni started their beer business venture in 2018 and are continuing to serve up lagers and ales using their own special recipes at the brewery in Xenia. Michael Van Kirk also helped start the venture, but has since returned to Wright State to complete his engineering degree.

The idea was planted when Hatfield met Lane at Dayton Beer Company, where Lane was a bartender. Lane had been making his own special home brews with Van Kirk for a couple of years and Hatfield was a fan of what he tasted.

“Doug’s home brews were excellent,” Hatfield said. “Perry and I were in the same boat with kids leaving for college, so we were looking for a side project. We went to Toxic Brew one night, had many beers, and scheduled another meeting. And here we are. And that’s really the truth,” Hatfield said.

Lane, who has taken research trips to taste different beers, even one to Oktoberfest in Germany, creates recipes based on his favorites, including English beers. Lane lit up when discussing the process of brewing and steeping barley in hot water to extract sugar. He also enjoys creating new recipes.

“It’s just like baking or cooking, or anything like that. It’s fun to create recipes and tweak them. You make what you know and then try to make the product better. It’s just cool to have a beer that’s all yours,” Lane said.

Taking the business from a concept to reality took a lot of hard work. Weekly meetings to discuss their business plan went on for two years. The trio had to find financing, equipment, and a place to set up shop. Originally the group looked at a building in Huber Heights, but was unable to secure an offer before it was sold.

The group is glad that happened because they say Xenia has been the perfect place for their venture.

“The bike path is right there. And there really aren’t other breweries in Xenia. Yellow Springs is probably the closest. And the people here are just great,” Hatfield said. Originally from Beavercreek, Hatfield lives in Xenia, so the proximity was an added bonus.

The name Devil Wind Brewing is a homage to Xenia. Local legend has it that the Shawnee Indians referred to the area as “the place of the devil wind.” As most area residents know, Xenia was hit by an F5 tornado on April 3, 1974, that killed 33 people and injured 1,300. The name proved to be perfect for the brewery—on the tornado’s anniversary in 2018, just a few days after opening, tornado sirens went off during a storm.

“It was weird. It was so close to when we opened. A tornado did touch down up the road,” Hatfield said.

Opening the brewery wasn’t completely devoid of issues. They put half the money down for equipment with a manufacturer in Ohio. Hatfield said they wanted to purchase American-made equipment. The equipment was to be delivered in October 2017. In September, the company called and said they were out of business and the money was gone.

“We scrambled. We were supposed to open in 2017. We found some equipment in stock that wasn’t exactly what we wanted, but it was in stock, so we purchased it,” Hatfield said.

While this was a setback, the group found local plumbers and electricians who knew their situation and were able to take payments for services rather than charging for everything up front. The group said they helped build almost everything in the brewery except the bar and the frame for the bathroom. The opening was finally scheduled for March 30, 2018.

It was an immediate success. Hatfield said the brewery opened at 4 p.m., but there was a line around the block at 3:30. One of the major reasons why the brewery is doing so well is because of the surrounding community, as well as the popularity of brewing. 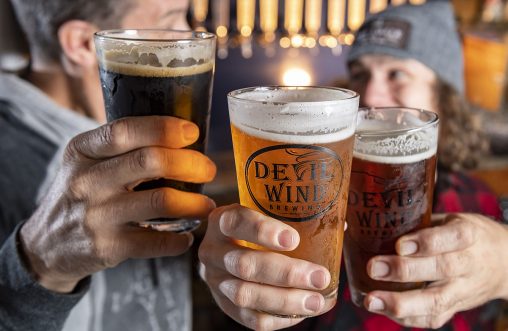 The name Devil Wind Brewing is a homage to Xenia.

“People enjoy having so many more styles [of beer] to try. Also, it’s just breweries in general. They have their own place to go. People love going to a small business like this, a small business that makes a good product. It’s also all about the environment,” Lane said.

The brewery has a vibe that is friendly and welcoming. The ambiance on the night before Thanksgiving was relaxed and fun. People were eating, talking, singing, and enjoying the bands. The brewery is a quintessential hometown bar with lots of regulars. Finding a friend is as easy as finding a perfect pour of beer or a finger of good whiskey.

The brewery stays connected to the community through different events and fundraisers. They recently helped start Xenia’s first Oktoberfest event. They work with the schools, 4 Paws for Ability, and other special causes, including raising $1,400 for a regular customer who was in hospice care.

One thing Hatfield is proud of is selling products from other small businesses in the area. Beyond beer, the brewery offers a lot of locally made wines and whiskies. The full bar offers a selection of around 100 different whiskies and bourbons. Local food trucks are outside the brewery almost every night. The Phatty Wagon has become one of the main staples at Devil Wind.

Beyond the drinks and food, the brewery is known as a place to hear great music, with bands playing on weekends and open mic nights offered weekly. For Lane, who graduated with a Bachelor of Music in Music Education from Wright State, the music is a bonus. He and Wyatt play in the house band.

“The best thing about owning this place is that it combines my two favorite things—brewing beer and music,” Lane said.

On the rare occasion when there isn’t music playing at the brewery, patrons might be able to take in a comedy show. The brewery also offers cornhole tournaments, music bingo, trivia nights, and an ultra-competitive shuffleboard league on Tuesdays and Wednesdays. A shuffleboard table was among the first items they purchased for Devil Wind after it opened. A second shuffleboard table was recently added to help keep up with the demand of people wanting to play in the tournaments.

So what is in the future for Devil Wind Brewing?

Growing the business is the focus. Currently, the brewery is closed on Mondays so they can brew beer. They also brew during the other days of the week, but only until the doors open. Another priority is to make room for canning their beer, which they recently started doing. This allows beer lovers to take some of the brews back to their homes. Having cans available also helps to expand their beer into markets outside of Xenia.

April will be the brewery’s four-year anniversary and a celebration is being planned. Lots of bands and beer specials will be available. 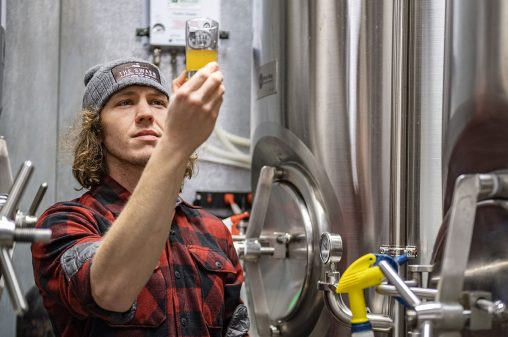 However, when it comes to talking about success, the conversation always goes back to the beer. Wyatt, who is in charge of many of the financial duties and inventory, said the beer is top notch.

“My favorite part about working here is drinking this wonderful beer. We have some of the best beer. We have such a great customer base. We’re a hidden gem,” he said.

Devil Wind Brewing, at 130 S. Detroit Street in Xenia, is open from 4 to 10 p.m. Tuesday through Friday, noon to 10 p.m. on Saturday, and noon to 8 p.m. on Sunday. A list of events and food trucks can be found on their website at devilwindbrewing.com or on their Facebook page.

This article was originally published in the spring 2022 issue of the Wright State Magazine. Find more stories at wright.edu/alumnimag