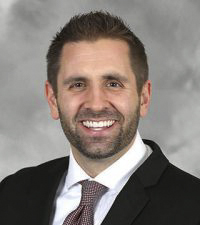 Students often wonder why they’re required to learn something they think they’ll never use. That goes for then-Boonshoft School of Medicine student Warren Gavin. He and his colleagues, though, have since learned otherwise.

Gavin came to Wright State from New Philadelphia, Ohio, on a tennis scholarship. He majored in psychology with an emphasis in pre-med, graduated, then a year later enrolled in med school. His career path led him to be a hospitalist—he sees and cares for adult patients already in a hospital—with the Indiana University health system in Indianapolis.

Then came the pandemic; Gavin found himself at the front line of care. “Since March 2020, a lot of what I do is care for COVID-19 patients. In the beginning, it was really scary. We didn’t know how to diagnose it, or what treatments were effective. It was frightening. And completely overwhelming.”

One was an emphasis on team-based learning. “It’s not just the physician running the show. Now, health care works in teams—you’re working with nursing, nutritionists, residents, pharmacists, care management, and physical, occupational, and speech therapy. Team-based learning was big at Wright State.”

Another was evidence-based medicine. “We were taught how to critically evaluate literature—any study that comes out—to drive real-world decisions.” With all the COVID-19 studies that were being released, Gavin said it was important to determine which ones were reliable so he and his colleagues could make informed decisions.

“The passionate professors who taught medicine knew what tools we were going to need, and they put those in our toolbelt. That makes me think fondly of what I learned at Wright State.” 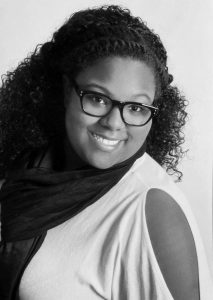 At the forefront of an effort to provide high-quality health care to the underserved, particularly those of diverse cultures, is a Wright State double graduate putting the leadership lessons she learned at the university to good use.

Christen Johnson, M.D., is in her second year as part of the team at the federally qualified Heart of Ohio Family Health Center in Columbus. “We’re creating an educational opportunity for medical students to experience what it’s like to serve the underserved and to learn about different cultures, health equality, cultural humility, and physician advocacy,” Johnson said. “By summer, the rotation will allow medical students to learn about taking care of culturally diverse people.”

Johnson completed a Bachelor of Arts in Biological Sciences with a certificate in African American and gender studies in 2012 from Wright State. Following that, she earned a Master of Public Health in population health and a Doctor of Medicine from Wright State’s Boonshoft School of Medicine in 2017.

Johnson is also pursuing a doctorate in multicultural and anti-racist education through Antioch University in Seattle. “I hope by diversifying the face of medicine, patients of all complexions and backgrounds will be cared for equitably by their physicians. I’m working on a national curricula to assist in that.”

She credits Wright State for being supportive and nurturing as she navigated her academic career. “Wright State was a wonderful opportunity not only to learn about leadership, but also to learn about creating equitable spaces for everyone.”

She added, “I’ve been in places that wanted me to be a type of doctor that I wasn’t. Some said my passion for health equality and anti-racism didn’t have a place in medicine. Wright State didn’t do that. When I needed mentorship and support, Wright State was there.

“I’m a Christian, and I believe God has a path for everybody. Overall, at Wright State I had a really supportive team of people who allowed me to grow to be the physician I was supposed to be.” 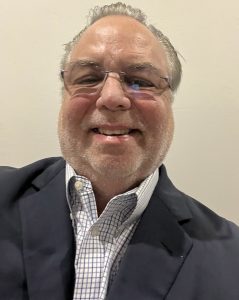 Last summer Gene Leber ’86 completed his nine-year term on the Wright State University Foundation board of trustees, during which time he learned how the university functions behind the scenes.

But considering how the university helped in a string of successes in his life, it is Leber who offers Wright State a behind-the-scenes, life-affirming testimonial.

The Monroeville, Ohio, native sustained an injury that left him a paraplegic shortly after graduating from high school. During his rehabilitation, he met a wheelchair user who had attended Wright State, lauding its disability friendliness, especially the underground tunnel network. “I took a tour, met nice people, saw the tunnel system, and said ‘This place is for me,’” Leber said.

Aside from his classes as a communication studies major, Leber became a research subject for a company on campus to develop electrical stimulation medical equipment to allow those with neurological disabilities, such as himself, to exercise on a stationary bicycle. “The technology from this equipment has kept me healthy. I still use it today.”

After graduation, the same company hired him. Leber quickly became assistant vice president of sales and demonstration. Eventually, though, the company closed.

Next, Leber became executive director for Access Center for Independent Living in Dayton—during which time he had an epiphany of sorts. Married to fellow Wright State alumna Connie Burroughs ’84 and with two children, son Dustin and daughter Abigail, he noticed a problem when he took his children to the playground. “If my kids got hurt, I couldn’t get to them because the playground base had heavy wood chips that my wheelchair couldn’t navigate.” He resigned from the center and started a company “to design playground systems that were progressive and inclusive.”

Twelve years later, he sold the company and moved to Florida, where he soon became a consultant for a company that retrofits houses to make them accessible.

Leber, now 62 and semi-retired, credits Wright State for his successes. “The educational experience for me was learning life skills from people with disabilities. It turned my life around. Just being in that environment allowed me to see the world a little differently. It prepared me for the type of positions I wound up getting in life.”