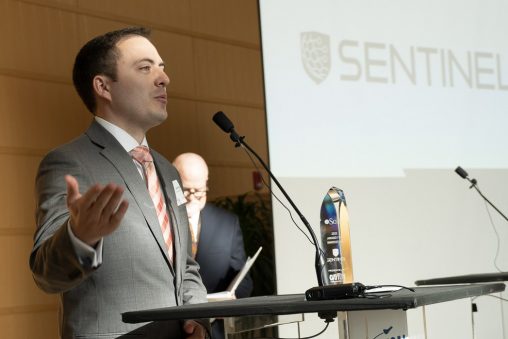 Wright State University alumnus and founder of Sentinel Occupational Safety Zachary Kiehl was the recipient of the 2022 Soin Award for Innovation.

This award is given annually by the Dayton Chamber of Commerce to Dayton-based businesses that have demonstrated an entrepreneurial spirit through a unique recently or soon-to-be-introduced product or service that will have the ability to sustain long-term growth for the company, increase local employment and assist in the creation of economic prosperity within the region.

He said that for as long as he could remember he has wanted to help people live longer and more fulfilling lives and that this desire and this passion impacted many decisions throughout his personal and professional life.

Through a government program at Aptima, a previous employer and co-founder of Sentinel, Kiehl was able to put these passions into practice through the development of a real-time intelligent guardian technology, which later became known as SafeGuard.

SafeGuard uses patented intelligent guardian technology and wearable sensors to provide health and safety oversight of individuals in risky environments and clinical states by gathering biometric and environmental information in real time. It uses that data to determine whether a person is in danger and can spot problems that would go undetected by an on-site human monitor, enabling a quick evacuation of workers or a swift response from rescue crews.

It also reduces the chance of multiple fatalities when workers are overcome trying to help or rescue their coworkers, something that happens 60% of the time when there are confined-space fatalities.

“We believe that this approach and technology can optimize health, safety and performance while reducing preventable illnesses, injuries and fatalities,” said Kiehl.

Though Sentinel has faced the growing pains of many startups, Kiehl said that the company is aiming for aggressive but principled growth, as interest in this type of technology continues to grow. He admitted that it has been a challenge to gain the needed visibility to be taken seriously in a competitive market such as health and safety technology and that was why winning the Soin Award was such a boon.

“The benefits of winning the Soin Award and collaborating more closely with the Dayton Area Chamber of Commerce are endless. However, the Soin Award specifically provided two crucial catalysts for Sentinel: visibility and resources. Both of these are critical for an early-stage company looking to introduce an innovative product to a larger market. We are thankful and honored for the opportunity to continue Dayton’s rich history of innovation,” said Kiehl.