The rich, honeyed strains of Bach’s Mass in B minor greet visitors when they walk into his farmhouse in rural western Ohio. Along North Lutheran Church Road in Trotwood, beef cattle munch on the slowly emerging shoots of grass in early spring.

Welcome to the world of Matthew Keener, a former Wright State University music student who took a 10-year detour to ranch in northern Montana before returning to Ohio to raise cattle and now start a nonprofit organization to donate beef to the needy.

Funds from Keener’s nonprofit will be allocated to six different regions of Ohio and used to buy cows from local farmers, turn it into hamburger and donate it to food banks, church pantries and soup kitchens across the state. Ohio will be the test market, with a goal of eventually expanding to three or four other states.

The idea was born when Keener realized that several local golf courses had been decommissioned but the grass still needed to be cut. So he volunteered to mow the grass at the former Madden Golf Course in Dayton for free, turn it into hay to feed his cows and donate beef from some of the animals to food pantries, starting with The Foodbank of Dayton.

“Fresh meat is really an item that we don’t see a lot of,” said Lee Lauren Truesdale, chief development officer at The Foodbank. “Not only is this meat going to feed families in the area, but the program is going sustain farmers and their operations and what they do every day.”

“By changing the way we manage the grassland areas that aren’t being used, we can turn that into protein and feed people in the communities that definitely need it,” he said.

Keener’s farmhouse began as a log cabin built by his great grandfather in 1837 on 160 acres just northwest of Dayton. Keener grew up next to it and spent much of his waking hours there as a boy, mowing grass and maintaining the barns. 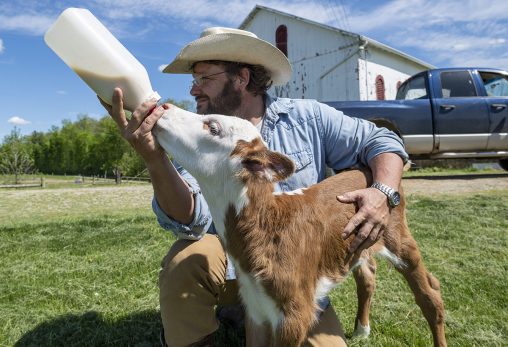 Matthew Keener, a farmer and former Wright State music student, has launched a nonprofit organization to donate beef to the hungry, starting with the Foodbank of Dayton. (Photos by Erin Pence)

His interest in music began at a young age. He sang in church choirs, an opera children’s chorus and later with the Dayton Bach Society.

His father, a graduate of the Cincinnati Conservatory of Music, taught music at New Lebanon schools and later at Wright State. Keener had his father as a music teacher all through high school and at Wright State.

The opera-singing, French horn-playing Keener currently sings in the choir at Concordia Lutheran Church in Oakwood.

Keener enrolled at Wright State to study music after graduating from Dixie High School in 1995. During that time, he would go to Montana in the summers to work on harvest crews.

“I absolutely fell in love with Montana and one year I didn’t come home,” he said. “I stayed in Montana for 10 years, working on cattle ranches and riding horses.”

Keener said the experience changed him drastically, teaching him to appreciate the solitude and the quiet. He later got rid of his television and rarely listens to the radio so he can concentrate on his own thoughts.

When he returned to Ohio, Keener decided to take over the family farm and start a beef cattle herd. It was tough sledding at first.

“For a long time, we didn’t know if we were going to make it,” he said.

Then Keener discovered Polyface Farm, which is run by Joel Salatin and his family in rural Swoope, Virginia, and is known for using unconventional methods to emotionally, economically and environmentally enhance agriculture. The methods include direct marketing of meats and produce to consumers, pastured poultry, grass-fed beef and a rotation method that creates an ecological system.

After Keener saw a video about Polyface, he had an “epiphanal moment” and jumped on board the farm-to-table movement.

“That is going to save this farm,” he recalled thinking. “I knew that was exactly what it was going to take. So we started rotating cattle. We took row crops out. We stopped using the chemical fertilizers. We started composting.”

Keener said people want to know where their food comes from and that it is raised in a good fashion.

“The consumer is now driving the ship in a different direction,” he said. “They are asking for a better-quality product from farming. It creates more opportunities for people to do what I’m doing.”

Keener supplies about 15 restaurants with meat, most of it wagyu beef, among the most sought-after meats in the world because of its buttery tenderness. And once a month, needy families can pick up discounted beef, pork and chicken from Kenner’s butcher shop in Dayton.

The 43-year-old Keener and his farm have been featured in a documentary film called “Farmers for America,” which highlights the nation’s younger farmers. It was produced by Graham Meriwether and narrated by Mike Rowe, known for his work on the Discovery Channel series “Dirty Jobs.”

Keener said his six years at Wright State combined with ranching in Montana have enabled him to bridge the gap between farmers and city dwellers.

“It allowed me to speak a different language,” he said. “You just have to learn how to navigate different fields.”