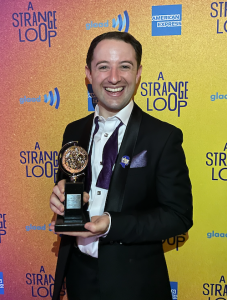 Joey Monda ’12 won a Tony Award as a producer of “A Strange Loop,” which won Best Musical and Best Book of a Musical at the 75th annual Tony Awards.

Wright State University musical theatre graduate Joey Monda has once again won a Tony Award for his excellent work as one of the producers for an acclaimed musical.

Monda, the producer and owner of Sing Out Louise! Productions, won as a producer of “A Strange Loop,” which was nominated for Best New Musical. “A Strange Loop” earned 11 total nominations, the most of any show.

“A Strange Loop,” which was written by Michael R. Jackson, has already won the Pulitzer Prize in drama.

Monda was also nominated for a Tony Award for Best Play as the producer of “Slave Play” in 2021. He has also produced the successful Broadway shows “Allegiance,” “The New One” and “Mrs. Doubtfire.”

He has also developed innovative contracts and structures to film and release Broadway shows for Cineplex release and pay-per-view showings, making live theatre available to more viewers. His production company has brought “Allegiance,” “Bandstand” and “Kinky Boots” from the stage to the screen.

Monda earned a Bachelor of Fine Arts in musical theatre in 2012 from Wright State. In 2020, he received the Graduate of the Last Decade Award from the Wright State Alumni Association.

In addition, Law Dunford, who earned a B.F.A. in acting from Wright State in 2015, had multiple roles as an understudy and swing performer in the jukebox musical “Girl From the North Country,” which received seven Tony nominations, including Best Musical.