In 1828 the Morris family perched a small, one-room, log house atop a hill in what is now Morris Reserve in Bellbrook, Ohio. The home morphed and grew over the years, sheltering multiple generations of Morrises until it burned to the ground in 1940.

Other than a lone, root-choked set of stone stairs, nature has managed to all but erase most of the visible evidence that the Morris family lived and died on that land for over 100 years. At least to the untrained eye. 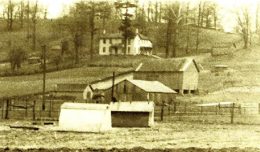 This photo of the Morris Farmstead gives students who are participating in the Archeology Field School, an idea of what the farm looked like in the 1930s.

This was one of the reasons Lance Greene, Ph.D, associate professor of anthropology at Wright State, chose this hidden historic site for this year’s Archaeological Field School.

Serving as both a research project and as a way to give students practical experience as archaeologists, excavations have taken place at multiple locations over the years.

Greene said that the fact that the house burned to the ground made the site an ideal challenge for students.

“The house was occupied for over 100 years. In one sense it’s good. When the house burned, it trapped everything under the rubble. But it also creates a problem where you have 100 plus years of different artifacts stacked on top of each other. So, when we excavate, one of the things our students learn is how to date different artifacts,” said Greene.

Several students are currently working the site in three different locations, which include two foundation areas, the main house and stable, as well as another non-foundation area where Greene said they found a lot of artifacts.

He said the goal is to discover what happened with farming families in that particular part of Ohio, from the time of the early settlers where they were fairly isolated and had little contact with the outside world, to a more modern time. Students will track ways the farm changed while it was in use, such as what the family produced to make an income or how the structure of the farm changed over a long period of time.

Other than the onsite excavation, students also learn the importance of using archival research such as photographs and tax records. This research can help provide historical context as well as possibly help them make sense out of the artifacts they find in the field.

As an example, Greene said that they found tax records from the 1830s which showed that the Morris family made part of their income through distilling. He said that this was before the railroad and, at that time, shipping grain was too expensive.

On site, students painstakingly excavate small, one-meter square test units, gently removing layers of dirt and dumping them into large mesh sieves. Each nail, shard of pottery or bit of glass has a story to tell; though Greene said that some of the more intriguing finds were the ones that they could not readily identify. 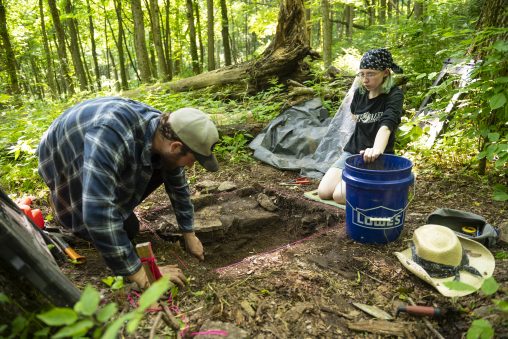 “One of the neat things, especially in the 19th century, is that they were making all these different kinds of farm tools out of cast iron and people haven’t used them in a hundred years. So, it’s a challenge to find out what the thing was used for,” Greene said.

Another mystery was literally tripped over by Katelyn Davis, an anthropology major in her first year at Wright State. Davis found a portion of foundation near the main house that Greene said didn’t quite match up with the original structure. One explanation is that it could be part of a structure that was built by the people who sold the land to the Morrises.

Not everything is a puzzle to be solved. Davis said that one of the most exciting things she found was a group of unglazed redware fragments.

“We believe we found enough that we can put the pot at least somewhat back together so that we can see what it looks like. I’m very excited for that,” Davis said.

In addition to learning about archeology, Greene said that because this site is on a nature reserve, students have an opportunity to learn how to interact with the public, such as the curious hikers who walk by the site.

All and all he said that this site will have plenty of opportunities for discovery and learning for future students, including an old, debris-filled well and the yet undiscovered locations of the outhouses on the property.

“Those are really neat to excavate, because those are generally the places where people throw the stuff they don’t want people to see. Historical archaeologists love finding privies because they hold all the secrets,” said Greene. “I mean, who is going to go down there except an archeologist a hundred years later?”