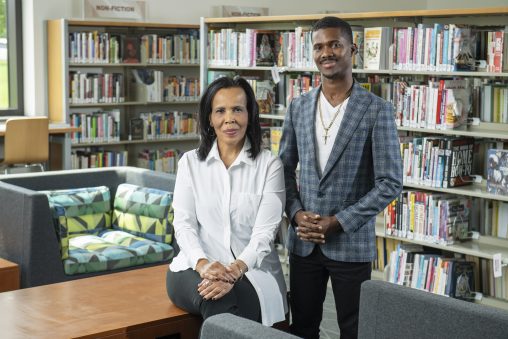 Wright State alumna Veleta Jenkins and Darius Ricks have been working for more than two years to raise funds to build a library in Ricks’ home country of Liberia. (Photo by Erin Pence)

Jenkins admits that she had minimal knowledge of Africa and its culture. This changed during the last two years of her teaching career at the Job Corps Center in Dayton when she had students representing 13 different countries on the continent.

Jenkins, who received a master’s degree in educational leadership from Wright State University, began learning through her understudies about African culture and the challenges young people face when it came to education. It had an impact on her.

“Honestly, it was a challenge to teach my African students initially. They all had literary deficiencies because they did not have access to resources like we do here in the States,” Jenkins said.

This became even more apparent to Jenkins when she asked one of her students, Darius Ricks, a native of Liberia, to discard a box of old books that contained dated encyclopedias and teaching manuals.

“Darius asked me if he could have the books because he wanted to ship them to a struggling school in Liberia,” she said. “Darius said they did not even have a school library. There is not a library in the entire country for that matter.”

Jenkins was surprised at this revelation but after researching the matter discovered her student was correct about conditions in Liberia. Ricks, who moved to Columbus in 2016 to join his mother and siblings, said his native Liberia is one of the poorest countries in Africa.

“I often think about my friends and other disadvantaged youth in Liberia. They do not have good schools, adequate school supplies, books or even a public library like we do in America,” Ricks said. “Therefore, I became inspired and dreamed of wanting to build the ‘first’ technology-focused public library in my country. Education is the key to success and without a proper education, life can be difficult. So, I am dedicated to using my voice to bring awareness to the importance of literacy and libraries in Liberia.”

Ricks said a library in Liberia is important because it will increase the literacy rate and create opportunities for proper education and reading.

After learning of Ricks’ desire, Jenkins asked one question: “How can I help?”

Ricks replied by asking Jenkins if she could help him get a library built in the community where he was raised in Liberia.

“That one question Darius asked me more than two years ago led to us having an impact here at home and internationally. He wants the young people in his country to have the same opportunities as our children in the U.S.,” she said. “Darius says they need to be leaders, not followers. I agreed to help, and Darius held me to it.”

Jenkins has since left her teaching position at Dayton Job Corps to focus full-time on the mission of Library for Africa, of which she is founder and CEO. Library for Africa provides educational services and resources to youth in Dayton and Liberia.

Her goal is to raise $350,000 to build a technology-focused library in Liberia. Jenkins and Ricks purchased two acres of land where the future library will be built.

Library for Africa’s board of directors assists with outreach and fundraising. Jenkins said community outreach and public relations efforts through media are necessary to achieve the goal.

“We cannot do it by ourselves. We are reaching out to ask people for their help,” she said.

Library for Africa also has a small staff in Liberia.

Jenkins said young people in Liberia aspire to attend college in the United States, so she and Ricks communicate and coordinate efforts with Dayton-area colleges to help eligible Liberian students navigate the admissions process. Several students have already been accepted to Central State.

Library for Africa will host its inaugural African Extravaganza: Countries Connecting Through Education and Relationships gala on Aug. 13 at Sinclair Community College.

The extravaganza is a fundraiser to build a library in Liberia, as well as celebrate the bicentennial of the United States’ relationship with Monrovia, the capital of Liberia and the 50th anniversary of Dayton being a sister city to Monrovia. The keynote speaker will be Charlie Nelms, a three-time university president, philanthropist and author.

“There is already a longstanding connection between Dayton and Liberia. We will foster an even stronger relationship,” Jenkins said. “Library for Africa is aiming to make this an evening to remember. It is for a great cause — educational resources for both our young people in Dayton and Liberia.”

Tickets for the gala can be purchased on Eventbrite. Ticket sales end Aug. 5 and cannot be purchased at the door.