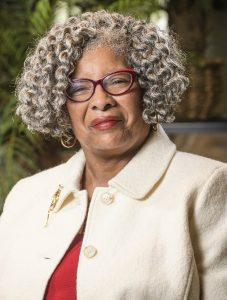 Marlese Durr, professor of sociology in the College of Liberal Arts.

The Jessie Bernard Award is given in recognition of scholarly work that has significantly expanded the horizons of sociology to fully encompass the role of women in society. It also honors those who have demonstrated significant contributions to the discipline throughout a professional career.

In addition to her scholarly work, American Sociological Association award committee members mentioned other significant factors in choosing Durr for the award, including the support she has provided junior scholars, helping them to promote their work and connecting them with powerful people within the discipline, and the work she has done to ensure that marginalized scholars could access spaces in the association and in the discipline that would further their stature in scholarship and positions in leadership.

Durr, who has been a professor at Wright State for the past 28 years, said that the courses she teaches are from a macro sociological perspective and describes herself as a holistic scholar/teacher, who examines society from multiple perspectives.

Her research and publications largely focus on African American women and managerial and labor markets in the public sector.

Through her years of research, Durr has helped to shape the curriculum at Wright State as well as contribute to the greater understanding of a variety of macro sociological topics such as race and labor markets, African Americans and social networks, entrepreneurship and inner-city neighborhoods, and stressful life events and African American women.

Some of her more influential published works include “Race work and Families and the Lives of African Americans,” a textbook and reader that she wrote with Shirley Ann Hill; “New Politics of Race: From Du Bois to the 21st Century,” which was published after winning an ASA/National Science Foundation Award; “Sex, Drugs and HIV: Sisters of the Laundromat”; and “What is the Difference between Slave Patrols and Modern-Day Policing? Institutional Violence in a Community of Color” and “Keep Your ‘N’ in Check: African American Women and the Interactive Effects of Etiquette and Emotional Labor,” both of which have been cited over 3,000 times.

Durr has also had numerous significant leadership roles within the sociological community including serving as president of the Society for the Study of Social Problems and president of Sociologists for Women in Society.

Durr said she was both honored and surprised to receive the award.

“To have both senior and junior colleagues nominate me was a big deal. I was so excited,” she said. “This is something that people work toward all their academic lives.”

Durr will be honored on Aug. 7 as part of the 2022 American Sociological Association annual meeting.