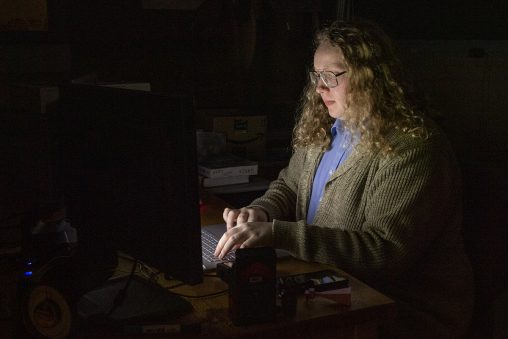 Thanks to the Department of Defense SMART Scholarship-for-Service, Thomas Beard is pursuing a Ph.D. in electrical engineering and working at the Air Force Research Laboratory. (Photos by Erin Pence)

For most, the choices in everyday life are rather trivial and mundane: Sausage or bacon? Coffee or tea? DC or Marvel?

Because of his academic prowess, Thomas received the Defense Associated Graduate Student Innovators (DAGSI)/Air Force Research Laboratory (AFRL) Fellowship and the Department of Defense Science, Mathematics and Research for Transformation (SMART) Scholarship-for-Service. Both programs support a three-year program of study leading to a Ph.D.

Michael Saville, Ph.D., associate professor of electrical engineering, said these awards are highly competitive and are shining examples of the impeccable aptitude with which Thomas performs both in the classroom and the research laboratory.

“For Thomas to win both awards speaks to his strong professional and academic record and represents the caliber of our CECS students,” Saville said.

Beard has served as a graduate teaching assistant in the Electromagnetics Lab since the fall of 2021 while concurrently researching reconfigurable antenna calibration and writing a winning proposal focused on designing a multifunctional antenna for DAGSI.

After carefully considering both awards, Beard accepted the Department of Defense SMART Fellowship, which includes three years of support and internships at AFRL during the summers.

“I ended up choosing the SMART scholarship over the DAGSI award due to SMART being more aligned with my research interests,” Beard said.

Although what he will be doing at AFRL has not yet been mapped out, the work will be related to sensor design and signal processing. He offered an example of the process whereby he would design the best antenna for a strong signal during a cellphone call, and then ensure the phone performs at a level where the user does not hear a “noisy mess” on the other end of a call.

“Thomas will begin his second year with the start of the SMART Scholarship so he’ll have a nice opportunity to finish his program while receiving a stipend and tuition,” said Saville. “This means he’ll be able to focus on his research completely. In addition, SMART is a scholarship service award. He basically has a nice job waiting for him at the Air Force Research Lab.”

A native of Beavercreek, Beard chose to attend Wright State after high school based on the glowing recommendation of his brother who at the time was majoring in computer science at the university.

Originally, Beard thought he would mirror his sibling and major in computer science but switched to electrical engineering because it sounded “cool.” Plus, his high school physics teacher was a former electrical engineer who Beard found to possess a considerable intellect.

“He seemed very smart and I wanted to be that smart one day. I’m still working on it,” Beard said. 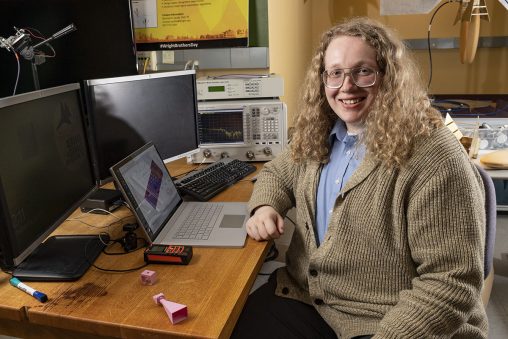 The SMART Scholarship ensures Thomas Beard will have a job available to him at the Air Force Research Laboratory when he graduates from Wright State.

He worked for four years before coming back to Wright State in 2021. He hopes he can obtain his Ph.D. in electrical engineering, with a focus on antenna theory and signal processing, in three years through research and working with Saville and AFRL.

“I try to maintain a maximum 40-hour schedule for school/homework so as to not overstress myself,” he said. “Thankfully I think all the classes and research is fun. The schedule I maintain allows for other interests and hobbies.”

And what might those entail? “Nothing too exciting,” Thomas said. “It’s mostly playing video games or watching reality TV to decompress after school.”

He has also enjoyed creating toys on his 3D printer for his new cat. “It’s been fun printing different cat toys and seeing how well received they are,” he said.

Some of Beard’s fondest memories at Wright State are working as a tutor helping students understand the process of solving their homework.

Following graduation, he will continue to work in AFRL for a few years. Once the contractual obligation of the SMART Scholarship has elapsed, he plans on staying put.

“I’m very likely to continue working for AFRL due to the impressive research they do,” Beard said.