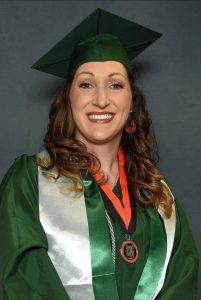 After putting her education on hold for several years Stephanie Porter earned a bachelor’s degree in psychology from Wright State in April 2022.

Putting your dreams on hold for the sake of others is never an easy thing to do. Kettering resident Stephanie Porter, who graduated in April with a bachelor’s degree in psychology from Wright State University’s College of Science and Mathematics, knows this better than most.

Porter was a stay-at-home mom working on a degree that would allow her to become an intervention specialist. Unfortunately, after her divorce, her education had to take a back seat to working two full-time jobs and supporting her two daughters as a single mom.

“Something had to give, and pausing my dreams seemed to be the only reasonable solution,” said Porter.

Even though times were tough, she said that she never gave up on the idea that she would eventually return to college and finish her degree, both for herself and for her daughters. She said that she refused to ever be the excuse that her children did not finish something and felt an obligation to be the example they needed to see.

Porter eventually remarried and decided that the time was right to begin pursuing her educational goals once more. Through the adult learning program at Wright State, she was able to go back to college part-time while continuing to work.

She said that she did not come to her decision to choose Wright State lightly. It was important to her to find an educational institution with a well-respected psychology program that also considered the challenges she faced as an adult learner with her unique needs. After creating her list of criteria, she began her research into available programs in the Dayton area.

Wright State not only met her criteria as a nontraditional student, but it also aligned with her educational goals and had the edge of being accredited by the American Psychological Association.

Finding the right school was only part of the battle. Porter still had to find a way to balance work, parenting and academic obligations. These challenges were compounded by the fact that she became pregnant with her third daughter while attending Wright State. She said that only added to her determination to succeed.

One of the most important things she said she learned during her educational journey was that reaching these goals meant taking ownership of her education, from finding an advisor who would proactively help to keep her on track to being her own advocate when she needed to be. 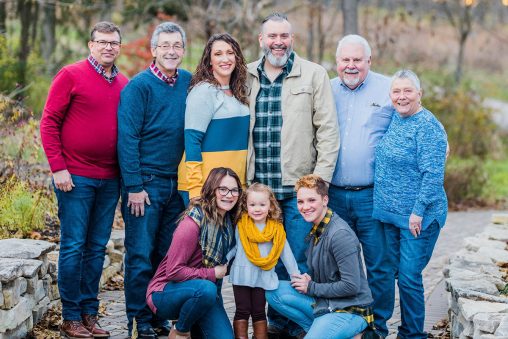 She also found it helpful to network with other adult students. “They make great study buddies and can help you cope with some of the stresses,” said Porter.

All and all she said that the journey was absolutely worth it.

“There was no greater feeling ever than to walk at graduation with my supportive family, my husband my three daughters, my dad, and my mother and father-in-law. A few friends watching online,” she said. “It was pure joy. We did it! I ran through the finish line, and it has all been worth the ride.”

Porter plans to take a year off to spend some time with her family before embarking on the next leg of her educational journey.

She plans to pursue a master’s degree in counseling starting in the fall of 2023. Her ultimate goal is to work with families of abuse, dependency and addiction.