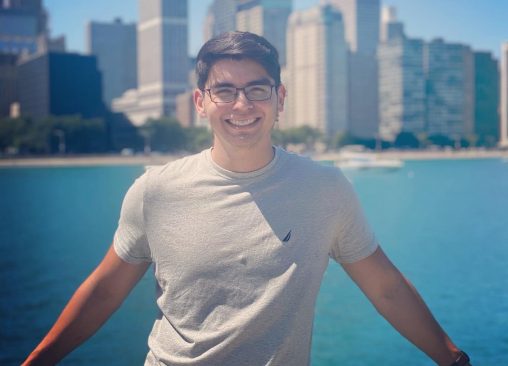 After graduating with his bachelor’s degree in physics in the spring of 2022 from Wright State, James Serna will attend Vanderbilt University to pursue a Ph.D. in biomedical research applications.

James Serna is hooked on quantum mechanics. Serna, a 2022 Wright State University physics graduate, wants to be a professor and research ways to merge quantum mechanics, chemistry and biology in biomedical research.

After Serna decided to venture into physics, he grew interested in quantum mechanics. He decided that looking into biomedical research would help him to combine his interests into groundbreaking research and development.

Serna is originally from Crystal City, Texas. He attended Wright State because he has family near Wright State and attending was a good financial decision for him and his family.

After graduating with his Bachelor of Science in Physics from Wright State, Serna will attend Vanderbilt University to pursue a Ph.D. in biomedical research applications. Serna said he is excited to experience a new environment at Vanderbilt.

“I’m excited for the new environment. It’s scary for me but overcoming things like that makes you a more developed person,” Serna said.

When Serna isn’t pursuing his passion for physics and research, he highly enjoys music. He has participated in marching band and has competed in Winter Guard International, the sport of the arts. He also teaches high school students to march in his free time and works a part-time job at Lowes.

He said learning to juggle his schedule with grades, music and a job was a life-changing experience. Serna highly recommends extracurricular activities for all students.

“I just told myself that I couldn’t let my grades go down if I wanted to do the music activities I loved,” Serna said. “I learned how to time manage and deal with stress, and I have so many memories and lessons I still use today. It is one of the big reasons I achieved as much as I did in undergrad and the mindset I utilized while marching is how I see school and research.”