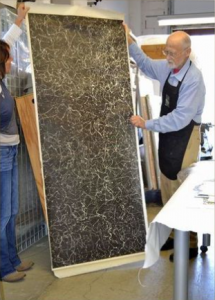 One of Dayton’s best-known, multifaceted and prolific artists has died.

Raymond L. Must, an original member of Wright State University’s Art Department faculty and co-founder of the Dayton Printmakers Cooperative, died July 22. He was 93.

He was born in 1928 in Detroit, Michigan. His first significant experience with the arts was in primary school when his art teacher showed the class how she worked and carved out a wooden sculpture. She became an early role model.

Taking a position to teach at the Dayton Art Institute, Must moved to Dayton in 1964. The first printing press came to the DAI just before his arrival and he, and other artists, would build the DAI’s studios. Later, he became one of the aforementioned original faculty members at Wright State University, where he taught from 1967 to 1991, achieving emeritus status.

“Ray was a gifted teacher, a consummate artist, and an engaging intellect,” said artist David Leach. “He was my closest colleague at WSU as we both taught printmaking there. He was both a colleague and a mentor, and his influence — the example he set as an artist, teacher and individual — dramatically affected my life and career.”

“In addition to Ray’s generosity and profound humanity, he had absolutely powerful, understated leadership skills,” said Campbell-Zopf. “He lived his values at the deepest level and was so generous for all the young professionals coming up. At the Printmakers Cooperative, we had a partnership that was so illuminating and wonderful. We worked beautifully together to start something that still lives today.”

Must also played a major role in raising funds and securing artists for the Dayton Visual Arts Center in its formative years. In addition, in 2006, his “Ray Must: Paintings, Prints and Sketchbooks” was exhibited at Purdue University. In 2012, pieces of his work were on display at the Robert and Elaine Stein Galleries at WSU in “Dayton Matrix: A Regional Print Exhibition” and later at The Dayton Printmakers Cooperative Winter Print Show and Sale.

“In short, Ray’s legacy does not only relate to his art,” Leach added. “As great as that is, the Must family legacy extends beyond that. Yes, he lived to make art, and our community will benefit from and remain grateful for that for many years to come. For the many friends, colleagues and past students who knew and worked with Ray, his legacy of kindness, humor and grace will accompany his art, and thus complete the picture of his lasting influence.”

“Ray was a quiet genius, bringing people together and helping them work well together,” echoed Campbell-Zopf. “He was a remarkable person inside and out because he touched the lives of so many artists.”

A graveside service was held today at Riverview Cemetery.