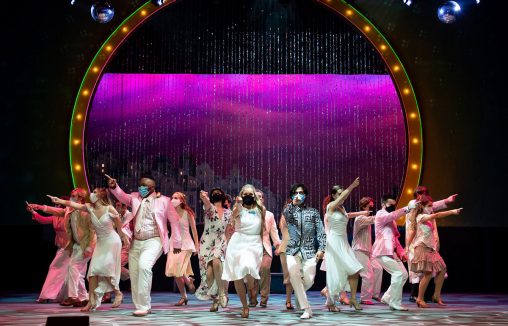 After featuring “Mamma Mia!” in the fall of 2021, Wright State Theatre’s 2022–2023 season opens with “The Mousetrap” and “Sister Act” in the Festival Playhouse. (Photo by Erin Pence)

Wright State University Theatre will present a new season of exciting classic and contemporary dramas, musicals and dance during the 2022–2023 academic year.

The new season celebrates Wright State Theatre’s first as part of the newly organized School of Fine and Performing Arts in the College of Liberal Arts.

Season tickets are now on sale on the School of Fine and Performing Arts website or by calling David Emery, Box Office manager, at 937-775-2500.

Wright State opens its Festival Playhouse season with Agatha Christie’s “The Mousetrap,” the longest-running play in modern theatre history. The mystery centers on a group of apparent strangers who have gathered in an old English country house cut off by a blizzard and discover that there is a murderer in their midst. “The Mousetrap” is led by guest director Jason Podplesky with scenic design by Dick Block, associate head of drama at Carnegie Mellon University.

“Bright Star,” by Steve Martin and Edie Brickell, is a joyous and heartfelt bluegrass musical story of love and redemption. The musical will be directed and choreographed by guest artist Leslie Goddard Baum.

“Arcadia,” by Tom Stoppard, leaps artfully between 1809 and the present while exploring the possibilities life offers as we make seemingly minor but irreversible choices. The drama is directed by Marya Spring Cordes, associate professor of theatre and associate chair of the School of Fine and Performing Arts.

“The Laramie Project,” by Moises Kaufman and the Tectonic Theatre Project, is about the reaction to the murder of Matthew Shepard, a gay University of Wyoming student. The story is told through the actual words of people who experienced the tragedy firsthand in Laramie, Wyoming. “The Laramie Project” is directed by Josh Aaron McCabe, associate professor of theatre and produced in collaboration with Wright State’s Office of LGBTQA Affairs.

Plans are underway to offer concurrent programming related to the production.

“On The Town” is the landmark musical comedy by Leonard Bernstein, Betty Comden and Adolph Green. Featuring a full onstage orchestra, Wright State Theatre’s production and will be presented in collaboration with other programs in the School of Fine and Performing Arts. “On The Town” is directed by Deer with musical direction by F. Wade Russo.

The Wright State Dance in Concert brings together the talents of faculty members in the Wright State Dance Program and outstanding guest choreographers to present a bouquet of ballet, jazz and modern dance. The concert includes guest performances by partner companies Dayton Contemporary Dance Company II and Dayton Ballet II.