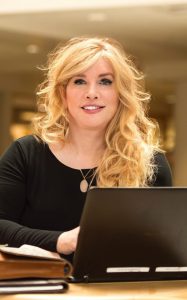 Nella Ludlow is the director of quantum computing initiatives and research professor of computer science and engineering at Wright State.

An overview of quantum computing, and how the lightning-fast data processing method has the potential to revolutionize fields like encryption, chemistry, medicine and pharmacology, will be the focus of a special lecture by a leading researcher at Wright State University.

Nella Ludlow, Ph.D., the director of quantum computing initiatives and research professor of computer science and engineering, will give a presentation on “The Excitement of Quantum Computing” on Thursday, Aug. 25, at noon in 101 Neuroscience Engineering Collaboration Building.

The presentation will also be available on Webex. Registration is required to watch the lecture online.

The lecture is sponsored by Wright State’s Department of Computer Science and Engineering as part of its Department Speaker Series.

Ludlow will include live examples in her talk, which will be accessible to everyone regardless of their knowledge of computer science, mathematics or physics. She will also discuss careers in quantum computing and the process of writing quantum computing programs.

Ludlow describes quantum computing as “one of the most exciting and fastest growing areas of computer science.”

“Quantum computing promises to be a disruptive technology with such dramatic speed improvements that real tractable solutions to hard problems could be solved in hours and days,” Ludlow said. “These same problems would take hundreds of years to solve on our best supercomputers, known as classical computers, by brute-forcing their way searching through all possible solutions.”

Ludlow joined the faculty in Wright State’s College of Engineering and Computer Science in early 2022 to lead the university’s quantum computing program and establish research opportunities between the Air Force and Wright State.

She also teaches several computer science courses, including a course on quantum computing that is open to undergraduate and graduate students.

Ludlow served in the U.S. Air Force for 16 years as a pilot, intelligence officer, mathematician, professor and researcher. While working at the Air Force Research Laboratory’s Rome Laboratory in New York State, she served as the Air Force’s technical director of artificial intelligence.