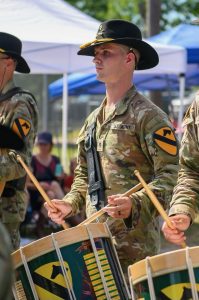 William Kan, a Wright State music performance graduate, earned a position as a percussionist in the prestigious U.S. Army band Pershing’s Own.

William Kan, a 2017 music performance in percussion graduate of Wright State University’s School of Fine and Performing Arts, recently won a position as a percussionist in the U.S. Army band Pershing’s Own.

Pershing’s Own, considered the premier musical organization of the Army, was formed on January 25, 1922, by order of Gen. John J. Pershing.

As a student at Wright State, Kan won a number of accolades, including a concerto competition in his first year, the Robert Stofer Award, several scholarships and a position with the Columbus, Indiana, Philharmonic, where he served for two seasons.

Kan also performed as a freelance musician with a number of orchestras, including the Buffalo Philharmonic, Erie Philharmonic, Canton Symphony, Lansing Symphony, Indianapolis Chamber Orchestra and many others.

He also met at Wright State his wife, Elizabeth Kan, who is also a graduate and percussionist and teacher.

After finishing his degree at Wright State, Kan received a graduate teaching assistantship position with the University of Georgia. Midway through his master’s program, Kan’s friend Jeff Brooks, who he also met at Wright State, encouraged him to consider the Army band field. Brooks was a member of the Army Old Guard Fife and Drum Corps.

“I had always considered the Army bands, but initially my plan was to win an orchestra job,” Kan said. “The nudge he gave me, gave me the push I needed to begin the process of joining the ‘Romeo’ bands, as we call them. The Army was always an organization I had some interest in, especially since I’m a history nerd and the Army is such an important part of our nation’s history.”

With a month left at Georgia, Kan’s audition with the Army bands was canceled by the start of the COVID-19 pandemic. It took about two months before he was able to set up an audition virtually and seven months before he could ship out for basic training.

Kan is stationed at Fort Hood, Texas, as an Army musician percussionist assigned to the 1st Cavalry Division Band.

The Army has two different types of musicians: 42R (Army musician), which is the designator he is currently assigned, and 42S (special band musician), which is what his designation changed to when he won the position with Pershing’s Own. 42R Army musicians are stationed in one of 20 stations globally and work closely with the Army divisions, brigades and battalions that they are stationed with, said Kan.

Special band musicians are stationed in Washington, D.C., and West Point and support high-profile missions, including presidential inaugurations, burials at Arlington Cemetery and arrivals of foreign and domestic dignitaries, among other things.

Kan admits that though being in the Army bands wasn’t his first choice, he is very glad that it is where he ended up.

“The bands are made up of true professionals and I am proud to serve as an Army musician,” he said. “The chance to serve my country and make music at the highest level is a dream come true for me.”