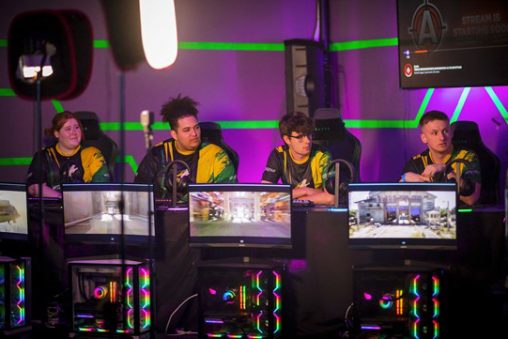 Members of the Wright State Collegiate eSports Club were featured in a panel at Vyralcon in Dayton.

Representatives from the Wright State University Collegiate eSports Club recently participated in a panel at Vyralcon in Dayton, where they discussed the challenges they faced in bringing collegiate esports to Wright State.

Vyralcon describes itself as a free meet-up for all things tech, gaming, streaming and cosplay.

Ted Autore, the club’s president and a materials science and engineering graduate student, said the club originally formed around the game “League of Legends” and later evolved to include other video games and esports teams.

When Wright State transitioned to remote operations at the beginning of the COVID-19 pandemic, club members started to restructure things within the club, reaching out to the College of Engineering and Computer Science. Because the club could largely function online, it made the transition a little easier, Autore said.

“Our club was already established as online due to the fact that most multiplayer video games and competitive games are online,” he said. “We received interest from a large number of students and were able to establish several different teams.”

He said that the connection to Wright State helped them in attracting sponsors, which enabled the students to set up a club room with high-end esports systems where students could get involved at a competitive level.

“We are the place to go for students looking to play video games with others and possibly form a team to play competitively,” Autore said.

Autore said the club had been interested in creating a partnership with Vyralcon for some time because it would allow the students to connect with the community and help others interested in establishing esports groups. Wright State’s club had the opportunity to connect with Sinclair Community College’s esports club, which he said will be great for partnering in the future.

During the Vyralcon panel, club members discussed how to get involved in esports, time management, keeping up with academic and work requirements while participating in esports, tips on what to do when you feel like you are no longer improving and job opportunities in esports.

“In our experience, esports were not a huge thing when we were growing up. Video games were never seen as something that would allow you go somewhere in life,” Autore said. “So, much of this was showing how much the field has evolved, and that yes, it can be a viable career path in life in many different avenues.”

Colton Dunkelberg, a second-year computer science major, participated in the panel and said some of the best questions came from parents and people outside of the esports community. A common question was did the students have the support of parents or other guardians while making the decision to play esports?

Dunkelberg admitted that initially the answer was no.

In response, the panel explained and showed evidence that these activities could possibly lead to an entryway to a more affordable college, provide a secondary source of income or even lead to a full-time career.

“Esports is a field filled with more than people just playing video games. Behind each game, there are programmers, artists, marketers and writers, and behind esports tournaments there are also streamers, casters and organizers,” said Autore.

You can join the club’s Discord Server to meet club members and get announcements about upcoming events. The Esports club room is located at 033 Millett Hall.