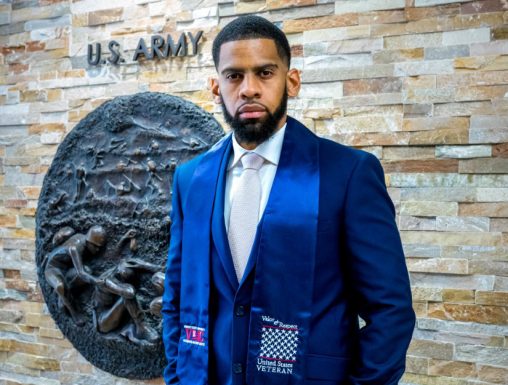 Army veteran Arreal Riggs found the support he needed in Wright State’s Master of Science in Logistics and Supply Chain Management program and at the Veteran and Military Center.

Former Army Staff Sgt. Arreal Riggs proudly served his country for nine years. When he decided to leave the military, he said he found the transition back to civilian life to be far more difficult than he expected.

Riggs eventually found the help and support he needed as a student in Wright State University’s Master of Science in Logistics and Supply Chain Management program and the Veteran and Military Center (VMC).

“I served all over the globe and domestically, in senior positions at Fort Bragg and Wright-Patterson Air Force Base, as well as overseas deployments to Afghanistan, South Korea and South America,” he said. “During my time in the military, things were structured for me. You know exactly, for the most part, what your day-to-day activities will consist of. Making the transition to civilian life, I had to learn balance and find things to occupy my time.”

Riggs, who graduated this summer, learned about the Master of Science in Logistics and Supply Chain Management program from a former employee while stationed at Wright-Patterson Air Force Base. He said that he already recognized Wright State as a military-friendly school and thought it would be a great fit.

“I was attracted to supply chain management and logistics because I had done a little of it throughout my time in the military and I wanted to further my knowledge in this field,” said Riggs, who works as a contractor at Wright-Patterson Air Force Base helping to ensure the mission-readiness of military aircraft. “My goal is to use this knowledge not only in my career field but use the tools that I learned to continue growing my business with health and wellness awareness.”

Riggs said that one of the biggest challenges with his transition from the military to civilian life was the sense of loss of not having the team atmosphere that the military provided when he was in service. He said that the loss of camaraderie was a particularly tough thing to navigate and that building relations with professors, staff and peers helped a great deal.

“This program gave me a sense of that teamwork element back and the feeling of belonging to something bigger than myself,” Riggs said. “Our cohort spent a lot of time together in person and virtually. So, I was able to build relations within the program and the opportunity to befriend another Army veteran in my cohort.”

Like many making the transition from military to civilian life, Riggs is also facing the challenge of dealing with posttraumatic stress disorder, which, he said, can really hinder his day-to-day activities.

He said that although he has received help through Dayton Veteran Affairs, the support he received from the Wright State Veteran and Military Center was invaluable.

Each semester, the Veteran and Military Center serves more than 700 students who utilize some form of G.I. Bill, about one-third of whom are military dependents. Students not using the G.I. Bill may still register with the VMC to access priority registration and its services.

The relations he built at Wright State and the services the university provides veterans helped Riggs complete his master’s degree, he said.

“I just want to inspire other veterans that are dealing with the same challenges, and let them know that there are resources out there to help them,” Riggs said.