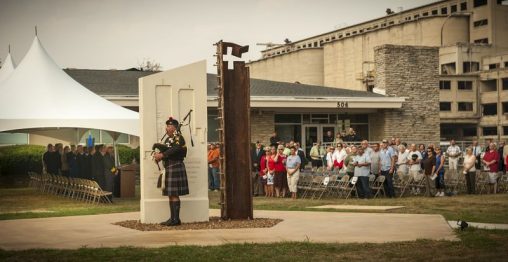 The 9/11 monument at Wright State’s Calamityville in Fairborn includes a steel beam artifact from the World Trade Center.

The City of Fairborn will hold its 21st annual 9/11 Memorial Ceremony on Sunday, Sept. 11, at 2 p.m. on the front lawn of Wright State University’s Calamityville, 506 East Xenia Drive.

The ceremony is open to the public. Parking is available at Calamityville and at the lot across the street.

In March 2011, Fairborn received a steel beam artifact from one of the World Trade Center’s twin towers that was incorporated into a monument commemorating the nearly 3,000 people who were killed in the terrorist attack.

Etched on the memorial are the words “We shall never forget. We shall keep the events and tears in our minds, our memories, our hearts and take them with us as we carry on.”

The monument was created to serve as a connection not only to those who were lost in the towers, on the planes and the first responders but also to the military members serving today or who have died serving their country.

During the ceremony, Kevin Knepp, Fairborn’s deputy mayor, will give an invocation and comments.

The American Legion Post 526 will give a 21-gun salute and play “Taps” in honor of fallen comrades. Del Braund, a retired sergeant in the Montgomery County Sheriff’s Office, will conclude the event by playing “Amazing Grace” on the bagpipes.

Michael Gebhart, Fairborn assistant city manager, said this is the first year that the Fairborn Fraternal Order of Police and the International Association of Firefighters had an active role in planning the ceremony.