The humble sandwich is a simple, accessible favorite in many cultures. From the simplicity of the lunchbox PBJ to the hearty deli grinder, the possibilities are endless and often memorable.

Wright State University alumni Justin Simmons and Kathleen Roll opened Tony and Pete’s Grocery and Coldcuts as an homage to the old-school deli sandwich shop and to their sandwich-loving dads for whom the shop is named.

Located at 129 East Third Street in Dayton’s historic Fire Blocks District, the small sandwich shop and grocery is part of a second renaissance for the area, which once rose from the ashes of the devastating flood and fires that ravaged Dayton in 1913.

The grocery area is small but eclectically jam-packed with all things Dayton, from local produce and flowers to Mikesell’s chips and beer from Warped Wing Brewery.

“We’ve been trying to get at absolutely every local brand we can think of and more and more are coming out of the woodwork. The more we can stock local the better it is for, really the whole community,” said Roll, who received a bachelor’s degree in marketing from Wright State.

The husband and wife team, who met in a computer lab in the basement of Wright State’s Oleman Hall, said that their original plan was to go into the bar business and had attempted to open a bar in Chicago in March 2020 at the beginning of the pandemic.

“Obviously the world got turned upside-down, and we got out of that situation and took some time to see how things were going to play out,” said Simmons, who received a bachelor’s degree in social science education from Wright State.

When they had some time to recover, they concluded that they still wanted to work for themselves. This time they decided to take a chance on Roll’s hometown of Dayton. 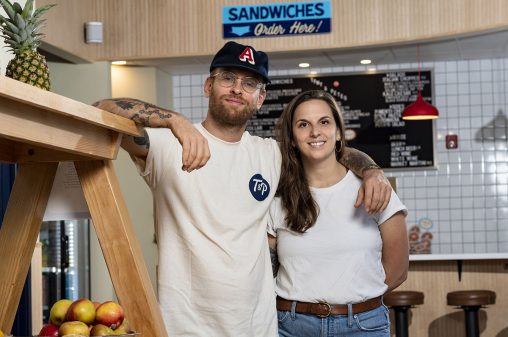 “We wanted to do something that would serve more of a purpose and maybe allow us to not be at work until four in the morning,” Simmons said. “This is something that we had wished existed in the downtown Dayton community and we love sandwiches. We love the simplicity and mass appeal and have a lot of respect for those old-school mom-and-pop sandwich shops.”

Simmons and Roll agree that the closely knit and supportive business community has been one of the more attractive features of starting their business in the Fire Blocks. Though they have only been open a short time, they said that they have received a lot of support from local business owners who would drop by to order lunch for their staff and offer encouragement and helpful advice.

“It’s a very supportive culture down here. It’s been very helpful to have these people in our corner who have been in these situations before, that we can look to for guidance and mentorship,” said Roll.

Asked about their favorite sandwiches currently on their menu, Roll chose the “Tony,” a turkey and a roast beef sandwich with roasted red peppers, American cheese, lettuce, and vinaigrette. She likes to make it spicy with the addition of a giardiniera, which she said can be added to any of their sandwiches.

In addition to sandwiches, Tony and Pete’s offers salads and sides with plans to expand the menu to include adding hot sandwiches.

Down the road Roll and Simmons are also looking at hosting evening events, including happy hours and occasional one-off events, such as a midnight market featuring local vendors and artists. The shop has a full liquor license and the owners are putting together a cocktail menu. 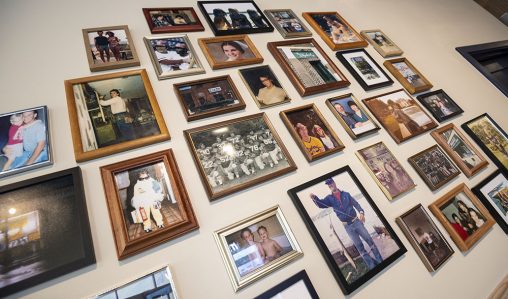 Justin Simmons and Kathleen Roll named Tony and Pete’s Grocery and Coldcuts in honor of their sandwich-loving dads.

“Right now, is a really good time to be in downtown Dayton,” Simmons said. “There is a lot of organic momentum happening down here and it’s exciting to see these local business owners really putting their stamp on the city.”

Tony and Pete’s is currently open Tuesday to Saturday, 11 a.m. to 7 p.m. Simmons said they may tweak their hours in the future. The sandwich shop also accepts online orders.