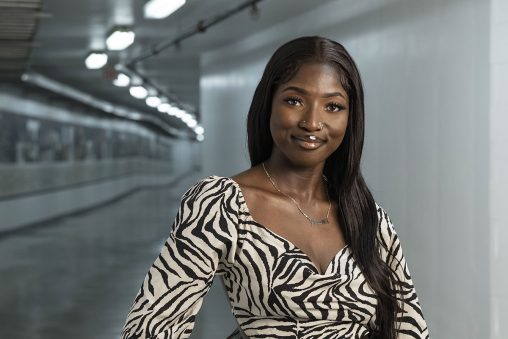 Yakai Kamara, a public health and organizational leadership major, has done a lot to find her place after transferring to Wright State.

Yakai Kamara transferred to Wright State University as the COVID-19 restrictions began. In a sense, the pandemic and her being in an earlier health crisis represent why she made the move. That, and to be among others who, like her, love other cultures and entrepreneurial spirit.

A native of Sierra Leone in western Africa, Kamara moved with her family to Columbus when she was 14. After high school, Kamara enrolled at a college near Columbus but soon found that wanting.

“At that time, it didn’t have enough diversity – there was no one like me,” Kamara said. “I wanted a college close to my family in Columbus that was diverse and with a variety of majors.”

A friend who was in Wright State’s African Student Union reached out to Kamara, offering to give her a personal tour. She liked what she heard about Wright State, and what she saw — especially the tunnel system.

“I hate being in the snow,” she said.

That tour and her research into the university drew her in, and she transferred to Wright State.

“But COVID came,” she said. “I went through with the transfer anyway.”

Like other students at the time, she took her classes remotely from her Columbus home.

She started taking classes in-person on-campus last academic year and continued with her public health major; this summer she added organizational leadership as a second major.

“When I transferred, I was a biology major, but I took a global public health class, and that became my true passion. I want to do research and become an epidemiologist,” Kamara said.

Driving that passion is the low level of public health — especially in the area of maternal health — in Sierra Leone. She wants to eventually do something to improve those conditions.

Speaking of Sierra Leone, Kamara recalls when her native country was hit with the Ebola health crisis.

“Living through Ebola was terrible,” she said. “I saw a lot of people die. No one close to me did, but we were all worried for our lives.”

In the meantime, Kamara made moves to connect with her classmates.

She joined the African Student Union and this year became its president. She joined the Korean Club because of her fondness for Korean films, saying, “I wanted someone to watch them with.” She also joined the Chinese Club.

All of this was her way of immersing herself in other cultures to satisfy her desire to be part of a diverse student body.

Then there’s her other major and the other aspect of her personality.  “I took organizational leadership because I wanted to learn leadership skills,” she said. “I also have a passion for business.”

It’s a passion she’s acting on with her own hair and makeup business called Kaii’s Touch in Columbus and a clothing boutique she is shifting to Sierra Leone.

“I turn some of my hobbies into business,” she said. “My family is business-oriented, which motivates me.”

Which leads to another facet of Wright State that appeals to her: the number of her fellow students who have their own businesses.

“It’s interesting to meet someone who is similar to me business-wise. Some are Black like me and still trying their best to have a business and keep up with school at the same time,” she said. “I like that Wright State showcases students and their businesses.”

Kamara is a senior on track to graduate at the end of the 2023 Summer Semester. She then intends to apply to Wright State’s Graduate School.

“There’s a public health master’s degree here. I want to look into that,” she said.

Kamara added of her Wright State experience, “So far, I’m fitting in OK.”