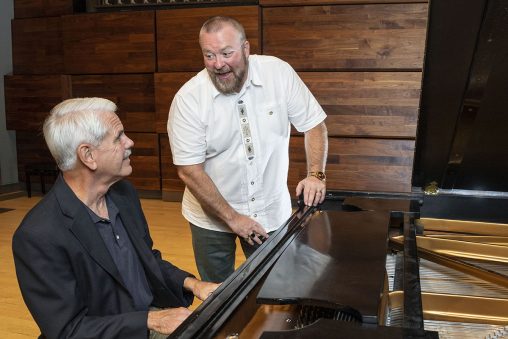 Steven Winteregg was honored for his composition “The City,” which was recorded by trumpet player Daniel Zehringer, chair of the Wright State School of Fine and Performing Arts.

Steven Winteregg, D.M.A., a composer and 1979 Wright State University music alumnus, tied for third place in the American Prize competition in the composition—pops/light music division for his composition “The City.”

The American Prize recognizes the best performing artists, directors, ensembles and composers in the United States at professional, collegiate, community and high school levels based on submitted musical scores and recordings.

Winteregg composed “The City” for trumpet and orchestra in four movements, “Street Scene,” “The City at Night,” “Street Performers” and “The L.”

While the composition could represent any city, Winteregg said it was directly inspired by one of his favorite large cities, Chicago.

The recording that he submitted to the competition was commissioned and recorded by Daniel Zehringer, D.M.A., chair of the Wright State School of Fine and Performing Arts, on Zenringer’s solo trumpet album “Journeymen’s Songs: The Music of Steven Winteregg.”

“Dan commissioned me to reduce the orchestra to a piano part so that he could play it on recitals and eventually record it on his album, ‘Journeymen’s Songs,’” said Winteregg, who received a master’s degree in music education and composition from Wright State.

Winteregg said that the composition—pops/light music division is a new category for the American Prize and felt the need to take up the challenge.

“I received honorable mention for orchestra composition in the American Prize competition in 2019,” he said. “Since I have the reputation of writing music that can extend from the abstract to the accessible, I thought it would be fun to try and receive an award in the new category too.”

A retired professor of music from Cedarville University, Winteregg had served as chair of the Department of Music, dean of the School of Humanities and associate academic vice president of the College of Arts and Humanities.

He has also served as principal tubist with the Dayton Philharmonic Orchestra and tubist with The Carillon Brass Quintet.

He received a music citation from the Ohioana Library Association and an Ohio Senate resolution commending him for his contribution to the arts in Ohio.

Winteregg’s compositions have been performed throughout the world, including North and South America, Europe, Africa, Asia and Australia.

Currently, Winteregg focuses on his composition work. Two of his compositions will soon make their world premiere locally, including “Expressions” as part of the Dayton Philharmonic Orchestra Masterwork Series and an orchestra composition geared for children based on the book, “I Knew a Shy Fellow Who Swallowed a Cello,” as part of the Bach Literacy Series at Cedarville University.