The land navigation training took place on Sept. 14 with 55 cadets searching for hidden signs along three different courses in the Wright State woods. The signs were almost identical to the ones they will search for at Fort Knox.

During the exercise, cadets were given a compass, map, ruler and a list of five coordinates to search for within a given timeframe. Cadets had to return to the starting point after locating all five targets or their time expired. Cadets had to repeat the course if they failed to locate their location points.

“Advance Camp is like the Super Bowl for all cadets,” said Markus Perry, a junior majoring in organizational leadership. “Based on how well you do at the camp is where you will rank among all of the other cadets in the nation.”

Shavonn Corbett, a junior majoring in political science, said the land navigation training is gives Wright State cadets an edge over other cadets they’ll compete against.

“A lot of schools don’t have this kind of land to do this so it kind of puts us at an advantage,” she said. 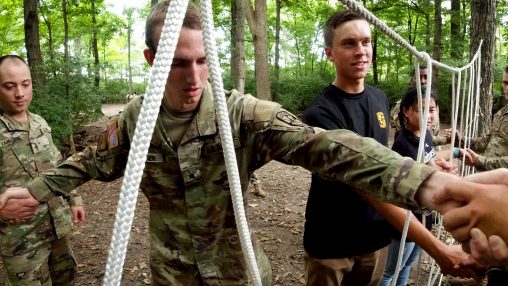 Cadets also participated in team-building and critical-thinking exercises at the Low Ropes Course on Sept. 21. The ropes course helps prepare cadets for the Field Leaders Reaction Course at Fort Knox.

“My peers and I who went to Advanced Camp last year, we all did very well and it’s because of the practice that we got here,” said Walter Duzzny, a graduate history student.

The cadets will participate in Advanced Cadet Summer Training in May 2023.