Olivia Bruno, a senior dance major at Wright State University, realized a lifelong dream of dancing professionally when she joined Dayton Ballet for its 2022–2023 season.

“There are so many things I love about dance. The main thing for me is probably the artistic expression of it all,” she said. “I need that outlet in my life and that’s my favorite medium to use because it’s so physical.”

As a member of Dayton Ballet II, Bruno studied under its co-director, Megan Forney, who is a 2008 graduate of Wright State’s Dance Program.

Forney said the partnership between the Dayton Ballet and Wright State prepares students as performers, not just because of the great instructors and training at Wright State, but it also gives them a glimpse of what that professional life is like.

She said that she is very glad that Bruno joined the Dayton Ballet and hopes that her successful transition from student to professional will become an example for other Wright State students and the ballet’s second company dancers. 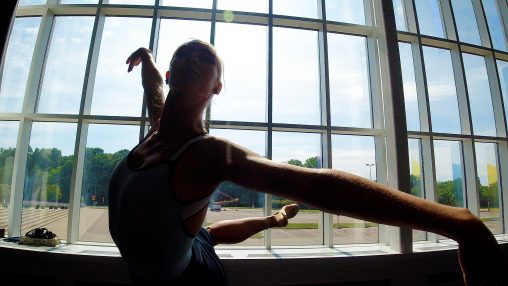 Olivia Bruno, a senior dance major at Wright State, will dance professionally with Dayton Ballet during its 2022–2023 season.

“Olivia is a really dynamic performer. She looks at ease on stage and has a way of making things look fun and exciting and easy,” Forney said. “She’s a really hard worker and a really good student in class. It’s a big accomplishment to go from DB2 (Dayton Ballet II) to a professional member of the company. It’s not something that happens that often.”

Before attending Wright State, Bruno went on a bit of a journey. After high school, she interned with the Nashville Ballet Company, then she joined BalletMet in Columbus before enrolling at Wright State.

“I love the Dance Program here, where we can dance all day and move and still get our degree,” she said. “It’s been double the work because I dance with Wright State and in the evenings I dance with Dayton Ballet’s second company. So, it’s been a little bit of extra work for me, but it paid off because now I’m in the position where I am a professional.”

Bruno said that had she not gone to Wright State the opportunity to dance with Dayton Ballet would have been a lot harder to obtain.

“Wright State has set up a partnership for students to go down a path where they are making connections with Dayton Ballet. Without that, I really would have been on my own,” she said. “There’s not really a place in the world for people who are in between their professional life and their student life. So, it’s kind of bridged that gap for me, so that I could transition from student to professional and make those connections.”

Prior to accepting the professional position, Bruno performed with Dayton Ballet’s Main Company in “Cinderella,” “The Nutcracker” and “The Great Gatsby.” 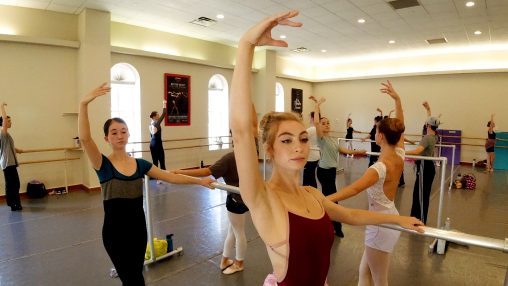 Olivia Bruno rehearsing with other company dancers at Dayton Ballet.

She is really excited to get to participate in the company’s four performances this season.

“Dancing full-time from nine to four is completely different from dancing just a couple of hours a day,” Bruno said. “I’ve grown so much from just my small experiences with them. So, I’m really excited to have a whole season with them. I think I will definitely grow a lot.”

As for what the future holds for Bruno, that is yet to be seen. For now, she plans to stay in Dayton.

“I really like the community,” she said. “I think we are really accepting of the arts and supportive of the arts in Dayton. So, I really enjoy dancing here.”

In addition to attending classes at Wright State and dancing Bruno is a teacher with Dayton Ballet.