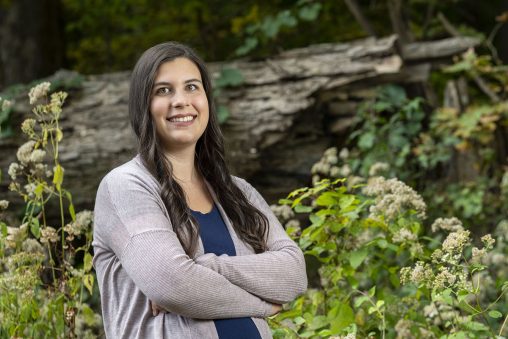 Michaela Woods who earned her bachelor’s degree and master’s degree in biological sciences from Wright State, was part of a global study on wood decay that was published in Science magazine. (Photo by Erin Pence)

Michaela Woods, a Wright State University biological sciences alumna, was credited for her part in the research paper “Termite sensitivity to temperature affects global wood decay rates,” which was published in Science magazine.

The article focuses on a global study that explores how decomposition rates varied with temperature and precipitation, in part because of the effects of climate on decomposer organisms such as microbes and termites.

Woods became interested in the possibility of conducting research as an undergraduate student when she took a course on the evolution and ecology of disease with Megan Rúa, Ph.D., associate professor of biological sciences, who is a co-author on the article.

“I was very excited about the topics. So, I asked her what options there were to do research in her lab,” said Woods, who earned her bachelor’s degree and master’s degree in biological sciences from Wright State. “I initially started helping with several projects in the greenhouse and doing literature reviews. When I was ready for independent projects, she introduced me to the Global Decay Network, which was looking at the differential impacts of termite and fungal decay worldwide. They had a need for an experimental site in the region.”

Woods said that dead wood in forests store is a significant portion of global carbon and that understanding what factors change the decomposition dynamics of these carbon stores can influence climate change.

“I am particularly interested in the web of interactions that underlie the complexities of carbon storage in forests,” she said. “During decomposition, insects such as termites and microorganisms like fungi break down wood in different ways and at different rates. This means that the interactions between decomposers and woody debris can shift the release of forest carbon.”

She said this relationship is further complicated by things like temperature and precipitation, which vary throughout the world.

“By participating in a global study, we were able to find generalizations in the drivers of wood decay worldwide,” she said.

Woods’ part in the research project was a two-year decomposition study in the Wright State woods, which served as a temperate deciduous replication for the global study.

“Within my portion of the study, I also examined the way that the invasive shrub Amur honeysuckle interacted with the decaying wood,” she said. “My portion of the project served as my master’s thesis and is now under review for publication in a peer-reviewed journal.”

Woods said she was glad that she pursued research opportunities as an undergraduate student and is excited by where it has led her.

“Being published in Science is extremely exciting since it is a top journal in the field. It was really empowering to be a part of a team generating impactful results with global implications,” she said. “I am grateful to be a part of such a wonderful collaboration.”

Woods encourages other students who think that they might have an interest in research to give it a try.

“Ask graduate students or faculty whose research is appealing to you if they have any opportunities to get involved in their lab. Oftentimes, there will be space to help others with their projects or do tasks that keep the lab running, which will provide you with opportunities to develop your own lines of independent research when you are ready,” she said. “I encourage undergraduates to try out different fields of research with different techniques to find what sparks their intellect and creativity the most.

Woods is currently pursuing her Ph.D. in biology at the University of Dayton where she is collaborating with Five Rivers MetroParks and focusing her research on conservation and forest restoration.