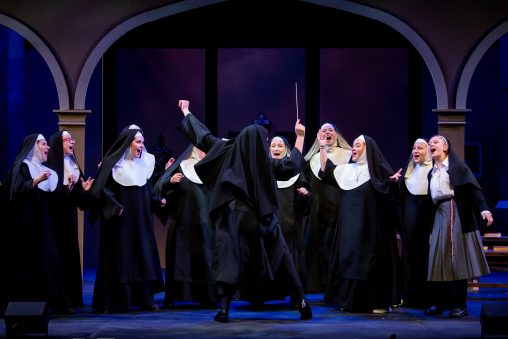 Wright State Theatre’s production of “Sister Act” runs in the Festival Playhouse in the Creative Arts Center from Nov. 4 to 20. (Photos by Erin Pence)

Tickets are $25 for adults, $23 for senior citizens and $15 for students. Tickets can be purchased online or at the Creative Arts Center box office between noon and 4 p.m. Monday through Friday.

Based on the 1992 hit film of the same name starring Whoopi Goldberg, “Sister Act” received five Tony Award nominations in 2011 including Best Musical.

“Sister Act” tells the story of Deloris Van Cartier, a 1970s disco diva who finds herself on the run after witnessing a mob killing. Placed into protective custody in a convent, she discovers a sense of her own value and how she can change others’ lives and be changed by them.

In the convent, Deloris finds a community of women who value her as a woman with an innate understanding of music. And together, Deloris and the nuns discover what sisterhood is, said Greg Hellems, the head of musical theatre and the director of Wright State’s production.

“It isn’t until she’s in the convent working with these women that her dreams start to become realized,” Hellems said. “Deloris starts to see value in who she is as a human and what she has to share. She loses her sense of being valued by show business and recognizes she’s part of a fabulous ‘sister act.’”

The production is the final show for Pam Lavarnway, professor of theatre design and technology, who is retiring after working on more than 70 productions over the last 31 years at Wright State.

Lavarnway was the final chair of the Department of Theatre, Dance and Motion Pictures before the formation of the School of Fine and Performing Arts and helped the theatre and dance programs resume live productions during the pandemic.

“Pam has been a wonderful colleague and an exciting designer,” said Joe Deer, artistic director and distinguished professor of musical theatre. “She’s been both a terrific teacher and designer and someone who has given a great deal to our students and the university. We will miss her enormously. But we hope she’ll be back as a guest designer soon.”

Next up in Wright State Theatre’s season is “Bright Star,” which will run from Nov. 18 to Dec. 4 in the Herbst Theatre. The season will then continue in 2023 with: