Marching toward a dream 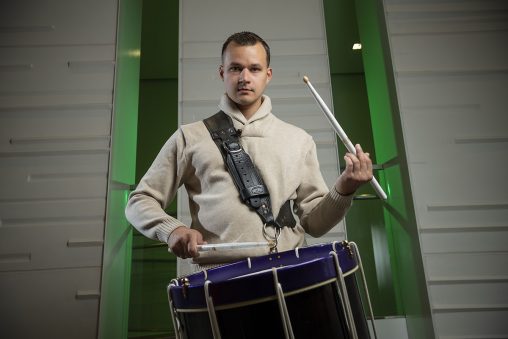 Percussion performance major Phil Andrews realized a lifelong dream when he was accepted into the Army Old Guard Drum and Fife Corps.

It’s a rare thing to know what you want to do with your life at 9 years old, and even rarer to see it through.

But at the age of 25, Wright State University percussion performance major Phil Andrews realized the dream of his 9-year-old self and accepted a position with the Army Old Guard Drum and Fife Corps.

Andrews’ entire family has been involved in the drum and fife scene in one way or another for generations. The first time he had a drum in his hands was at the age of 2.

“I was getting Christmas pictures taken at Sears. I was really uncomfortable and not having a good time,” he said. “My parents were just trying to get me to sit still and I’m having this major fit. So, my mom goes home and brings back this little baby tin drum that she got from some friends. When she got back, she put the thing in front of me and I just started whaling away. The rest was history.”

Andrews, who grew up in Bristol, Connecticut, didn’t make any big career decisions at that time. It wasn’t until he was 7 and won his first drumming competition that he decided drums could be more than just a fun hobby.

“We had a lot of drumming competitions in the area and I participated in this little individual snare drum solo competition,” he said.

Not only did Andrews take first place in his age group, but he also got a look at the score sheets from other age groups and realized that he had managed to outscore some of the high school kids.

After that experience, he started to take drumming more seriously and began to pay attention to the various drum and fife groups he saw.

“I saw the Old Guard for the first time when I was just 8 or 9 and I remember very vividly the incredible and just super synchronous, uniform drumming but they also did a lot of sick tricks,” he said. “As a young kid, I was like, that’s so cool. I want to do that. That’s when I decided that my end-all-be-all goal was Old Guard.”

In the pursuit of his goal, Andrews attended one of the Old Guard’s workshops at its home base in Ft. Meyer, Virginia, where participated in a mock audition.

“The idea was to show the entire workshop on base what exactly we were up to and what we could do,” he said. “The person adjudicating me was Sgt. Maj. Mark Reilly. I performed my solo and I guess it must have been good because he said, ‘I want to ask you a question and let’s just call this hypothetical for now. If I were to offer you a spot here in 10 years, would you take it?’ And out of instinct, I said, ‘yes.’”

Years went by and Andrews continued to pursue his passion for drumming as a battery coordinator for Cap City Percussion in Columbus, the percussion director for the Forest Hills School District and at Wright State as a music education major.

“I didn’t know that he had spent time in the Air Force as a percussionist until I met him for the first time,” Andrews said. “And I realized that he could also be someone who could mentor me in the soldier way, how to be, what to say, what not to say, what mentality I needed to have. That mentorship was super helpful to me.”

Eventually, Andrews heard of an opening with the Old Guard and began the process of auditioning. Part of the audition process involves making sure you are physically qualified to become a soldier. He learned to his dismay that was unable to pass the hearing test at that time. Since he was unable to apply for a waiver in time, he was disqualified.

Four years later, another spot opened up in the Old Guard. At that point, Andrews had decided to pursue his music education degree and initially did not intend to audition.

He quickly changed his mind, however, when he found out that the vacated spot had belonged to Sgt. Maj. Mark Reilly, the same man who had “hypothetically” offered Andrews the job over 10 years ago.

“I’m not a big believer in fate,” Andrews said. “I pretty much believe that you make you our path in life, but I felt I had to try out again out of respect for him and his influence and inspiration to me.”

When Andrews went for the physical assessment he passed the hearing test. After two days of auditions and interviews, he finally realized his dream.

“The 20 minutes after the final interview were the most stressful. I just had to tell myself that I’ve done everything I possibly could do to give myself a chance at the job I have always wanted in life,” Andrews said. “And somehow, someway, I found out that I had managed to talk my way into that job. It still doesn’t feel real to me. I’ve never been so elated in my life. I’ve never felt so accomplished.”

Andrews, who changed his major to percussion performance, expects to graduate from Wright State in April 2023 and will ship in June.