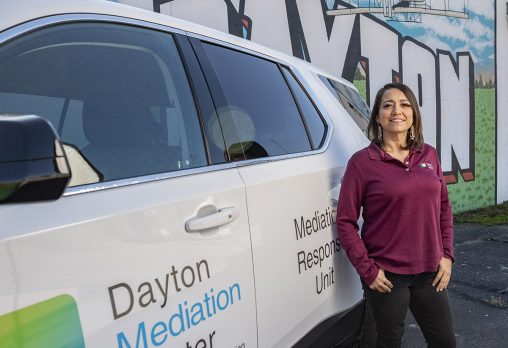 Raven Cruz Loaiza, who earned bachelor’s degrees in crime and justice studies and social work from Wright State, leads the Mediation Response Unit for the City of Dayton.

Wright State University alumna Raven Cruz Loaiza recently accepted the position of coordinator of the City of Dayton’s Mediation Response Unit, which is under the umbrella of the Dayton Mediation Center.

The Mediation Response Unit was created after the murder of George Floyd inspired police reform talks nationwide. Cruz Loaiza said that during that time the City of Dayton also started its own talks with the goal of reviewing current police practices and paving the way for positive change.

The unit’s goals are to improve police-community relations, provide alternatives to police response for lower emergency 911 or police calls and reduce the number of calls to 911 and police that would be more appropriate for the unit to handle.

The Mediation Response Unit provides an alternative response to calls for peace officers and similar calls that do not involve weapons or a history of extreme violence and aggression. Calls may include neighbor disputes, parking complaints, barking dog and other animal complaints, juvenile complaints and disorderly subject calls.

“We respond to crises in the community in the same manner as law enforcement but with a trauma-informed lens, allowing us to focus on more than just the issue at hand and dig a little deeper to the root of the challenges,” Cruz Loaiza said. “By providing a safe space for people to work through their conflicts and be heard, we help them to move through the crisis they may be experiencing.”

As an example, Cruz Loaiza said that the mediation unit responded to a loitering call that would normally be a low-priority case assigned to the Dayton Police Department. She said the Mediation Response Unit (MRU) was able to respond within a much shorter time and after engaging with the person and providing a safe space for them to be heard, Cruz Loaiza said they disclosed that they had been sexually assaulted and didn’t know what to do. After receiving consent, the unit notified EMS and they were transported to a hospital for a sexual assault kit.

In another case, the mediation unit was called in by Dayton Police Department to assist an immigrant experiencing domestic violence. Cruz Loaiza said after the police department deemed that the scene was safe, mediators responded and were able to establish a rapport with the victim in their primary language and connect them to community resources that could assist them.

Prior to joining the Mediation Response Unit, Cruz Loaiza was the director of a rape crisis and anti-human trafficking department in a victim services agency in northwest Ohio.

“In that position, I walked alongside victims who experienced some of the most unimaginable things and some of the darkest times of their lives,” she said. “In addition, I did lots of community development work and developed several rape crisis centers across Ohio that were put in place to serve victims of sexual violence and human trafficking.”

She said the experience she gained working with law enforcement, juvenile probation and children services and later becoming a licensed social worker and working with victims, systems and communities made working for the Mediation Response Unit the perfect role to bring all of her experience together to benefit the community of Dayton.

“Being able to see things through various lens allows me to provide trauma-informed care with empathy and compassion for marginalized populations of every kind in nearly any situation,” she said.

Cruz Loaiza, who graduated from Wright State in 2014 with bachelor’s degrees in crime and justice studies and social work, said her time at Wright State was also invaluable in preparing her for her future career.

“My education at Wright State University was pivotal in preparing me for the path I am on and the work I am doing,” she said. “With instructors that held me accountable, even when things were tough, to professors that lent me an ear when I was unsure of what path to take to fellow students that were learning alongside me. Wright State provided many opportunities that I may not have gotten elsewhere. For that, I am extremely grateful and humble.”