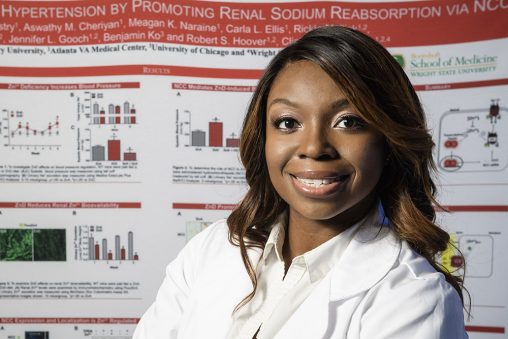 Williams serves as an associate professor in the Department of Neuroscience, Cell Biology and Physiology in the College of Science and Mathematics and the Boonshoft School of Medicine. She is also the director of the Small Animal Physiology Core.

At Wright State, she received a Faculty Award for Excellence in Early Career Achievement in 2020.

Williams, who was the recipient of the prestigious 2022 Carl W. Gottschalk Research Scholar award through KidneyCure, earned international acclaim in 2019 when her research linking zinc deficiency to kidney dysfunction and high blood pressure was published by the American Journal of Physiology – Renal Physiology and she was featured on the cover of The Physiologist Magazine.

She has also been recognized by the American Physiological Society with the Renal Section Young Investigator Excellence in Research Award in 2021.

In addition to her research, Williams is dedicated to bringing minority voices and perspectives to research and therapy development. She serves as president of Black in Physiology Inc. and on the Executive Board of the Dayton American Heart Association.

Williams received her Ph.D. in cellular and molecular physiology at the University of Alabama in Birmingham, where she began studying the relationship between zinc to diabetes.