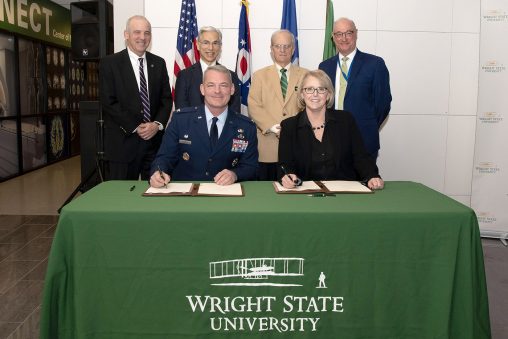 Officials from Wright State University and Wright-Patterson Air Force Base have finalized the first step in a new agreement that will afford Air Force researchers access to work in a university building directly on Wright State’s Dayton Campus.

“This agreement strengthens our already valued partnership with Wright-Patterson Air Force Base and is value-added to their research,” said Wright State President Sue Edwards, Ph.D. “Additionally, the enhanced partnership will create new opportunities for Wright State students to participate in Air Force-conducted research.”

Through this and other future agreements, Wright State will provide office and laboratory space to Air Force personnel in the Neuroscience Engineering Collaboration Building, which also houses the region’s only advanced magnetic resonance imaging (MRI) scanner dedicated exclusively to research.

“The partnership between Wright-Patterson Air Force Base and Wright State University has never been stronger,” said Col. Chris Meeker, 88th Air Base Wing commander. “As one of our greatest supporters, WSU will make a great partner for the Air Force Research Laboratory. We are very excited to execute this initial step to strengthen our institutions and further support collaborative opportunities.”

“This partnership represents the very best of what this country and state have to offer. Wright-Patterson Air Force Base has a proud legacy of service in the mission of keeping our country safe and secure, and today’s announcement strengthens the ties, mission and resolve to the Dayton area,” said Senate President Matt Huffman.

Researchers from Wright State and WPAFB cite this enhanced partnership as an effective collaboration that adds value to the existing relationship.

“Having Air Force researchers in a building directly on Wright State’s campus is a first of its kind for our region. It supports the missions of the Air Force while also providing our graduate and undergraduate students with invaluable opportunities to work on cutting-edge technologies and research problems, paving their way for further training and job opportunities at WPAFB,” said Madhavi Kadakia, Ph.D., vice provost for research and innovation at Wright State. 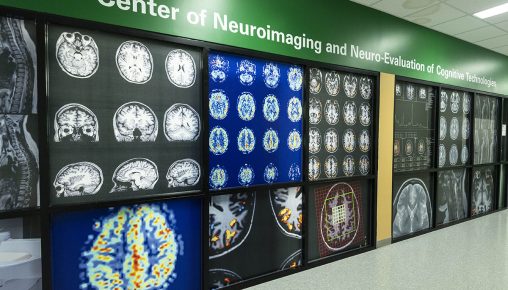 A focal point of the partnership between Wright State and Wright-Patterson Air Force Base is the MRI scanner, which is located in the university’s Center of Neuroimaging and Neuro-Evaluation of Cognitive Technologies.

“It is a first step, building on some previous grassroots activity, that will continue to expand in the future,” Bunning said. “AFRL recognizes the need and is actively pursuing opportunities to strategically partner with those in the communities in which we share talent, share facilities and share resources against common problem sets. We look forward to our future interactions with Wright State University.”

A focal point of the partnership is the MRI scanner, which is located in Wright State’s Center of Neuroimaging and Neuro-Evaluation of Cognitive Technologies.

The MRI scanner was funded through a Defense University Research Instrumentation program from the Air Force Office of Scientific Research and the State of Ohio Action fund by leveraging Wright State’s collaborations with the Air Force Research Laboratory’s 711th Human Performance Wing.

The mission of the center is to foster a collaborative environment for the Defense Department and academic neuroscience research in the Miami Valley.

“AFRL researchers are working alongside Wright State researchers, which opens the door for new hypothesis generation and even more collaborative opportunities,” said Matthew Sherwood, Ph.D., the center’s director and a research professor in Wright State’s Department of Neuroscience, Cell Biology and Physiology, who has worked with the AFRL on MRI-related studies for over a decade.

The partnership will also help Wright State execute its vision of a positive transformation of the education, economic and social fabric of the communities it serves, Sherwood said.